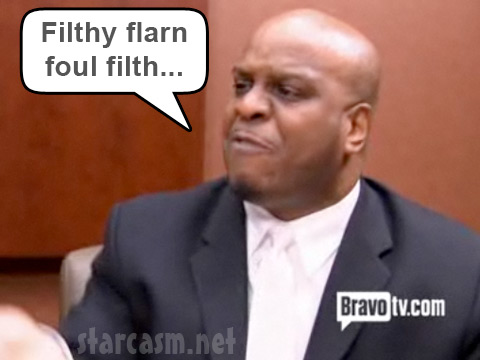 This is video from the Watch What Happens Live show that aired immediately after the season premiere of The Real Housewives of Atlanta Thursday night. The show had Sheree Whitfield on to answer viewer questions and address the fight scene she had with party planner Anthony Shorter, which Bravo knew would be the hot topic. (If you haven’t seen the clip, you should watch that first! Click here to see it) Shorter called in to the show and host Andy Cohen asked him about the incident (fast forward to the 1:40 for Anthony):

This guy just keeps digging a deeper and deeper hole for himself! Here is the complete Q&A:

Hello Anthony event planner, thanks for joining us

I’m good. Anthony, when you said, “I eat b*tches like you everyday,” what did you mean?

Well, I mean, is this how a top level executive behaves?

When you’re being given an event for free and the cost is approximately $60,000 and you’re not grateful and you are resentful and you’re mean toward the staff and the people who are throwing this event for you, you get to tend to be frustrated and I think that that’s actually what happened, because you know we were sponsoring this event for her and we were frustrated by the type of behavior and attitude that we were receiving from her.

OK. Is there an apology in Ms. Whitfield’s future coming from you?

Uh no, but I would like to apologize to Miss Thelma, her mother, for that comment, “your mama’s a b*tch,” because I really thought that was inappropriate, but I think Sheree got exactly what she deserved.

Alright Anthony, we’ll talk to you another time. [To Sheree] There you go. So, any other comments about old Anthony?

I would just say he’s crazy, he’s a lunatic, I hope he never works again in that field. He made a comment he did it for free. I didn’t ask him to do it for free.

Right. He was throwing you a party.

He offered, you know? And, sometimes you get what you pay for. So it was free and there you go.

Yeah, but absolutely he’s the worst. He’s the worst. He actually stood up to hit me like twice, like who does that? Yeah, they edited that part out. Two times. They had to pull him out of the room.

Anthony’s like a horrible plastic surgeon – he just can’t save face! (Click here to check out a post he made on a blog about the incident, in which he stresses he IS NOT gay and likes cats – or something to that effect) I talked about this incident and Anthony to great extent on that other post and I don’t know what else to say other than I’m sure Sheree is a difficult person to work with, but with a job like his, Anthony HAS to be professional! And he was absolutely unprofessional in the meeting and continues to be afterward. What do you think? I know you Atlanta housewife fans like to express your opinions, so let’s hear ’em!