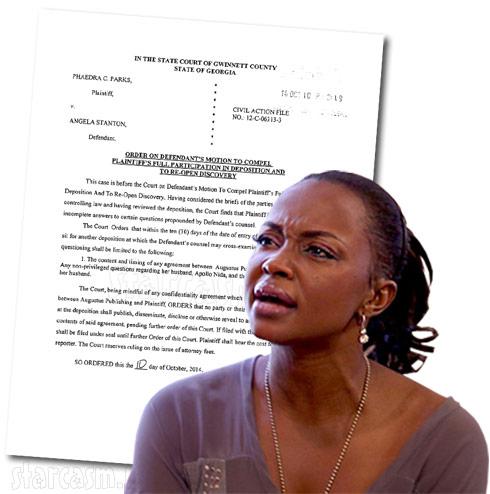 In case you missed it, Phaedra Parks thumbed her nose (to put it nicely) at the legal system during her epic and comically frustrating first deposition by openly refusing to answer any questions about Apollo, among other evasive tactics. (This was after months of delaying and avoiding the deposition in the first place.)

But, since Phaedra is suing Angela Stanton for defamation because Stanton stated in her book that Parks not only knew about Apollo’s criminal activities, but was involved in them as well, it is imperative for the defense to be able to ask Phaedra what she knows about it! Or at least that’s what Stanton’s attorney and the judge seem to think. (And remember, this is all pertaining to Apollo’s first arrest, well before he was married to Phaedra and protected by any sort of marital privilege.)

“The Court finds that Plaintiff has given evasive or incomplete answers to certain questions propounded by Defendant’s counsel,” the order reads.

The other topic Phaedra is compelled to talk about in her second deposition is her deal with Augustus Publishing, who published Angela Stanton’s book, Lies of a Real House Wife: Tell The Truth and Shame The Devil. Phaedra initially sued them as well, but they settled before going to court. The only problem is that the terms of that settlement are confidential, so the judge ordered the deposition sealed. I assume that is a huge victory for Phaedra, who now will not have to worry about what she says she knew about Apollo’s criminal activities being released to the public. (Grrrrrr!) Here is exactly what the court order stated:

The court, being mindful of any confidentiality agreement which may attach to the agreement between Augustus Publishing and Plaintiff, ORDERS that no party or their counsel or any person present at the deposition shall publish, disseminate, disclose or otherwise reveal to any person or other entity the contents of said agreement, pending further order of this Court. If filed with the court this deposition shall be filed under seal until further order of this Court. Plaintiff shall bear the cost for the court reporter. The Court reserves ruling on the issue of attorney fees. 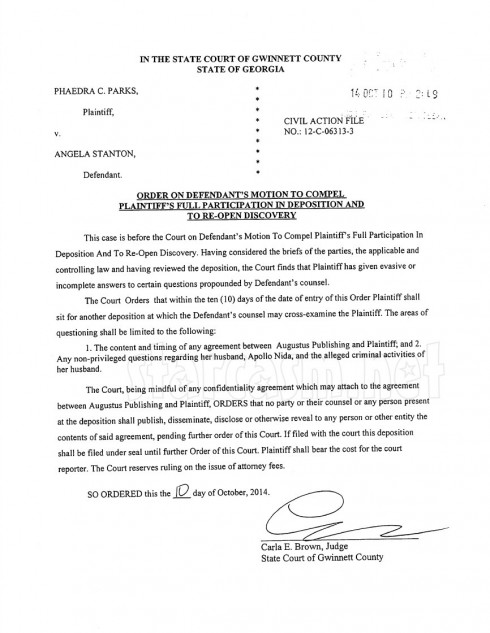 It will be interesting to see how Phaedra handles this considering that the judge ordered her to sit for her deposition “within the ten (10) days of the date of entry of this Order,” which either means Monday, October 20 if the “date of entry” is when the judge signed off on the order, or Friday, October 24 if it means the stamped date in the upper right hand corner, which I assume is the date it was filed. Either way, it will be tight for Phaedra because she is currently in Los Angeles where she will be taping an episode of Ellen on Tuesday with a book signing scheduled in Gardena, California on Wednesday.