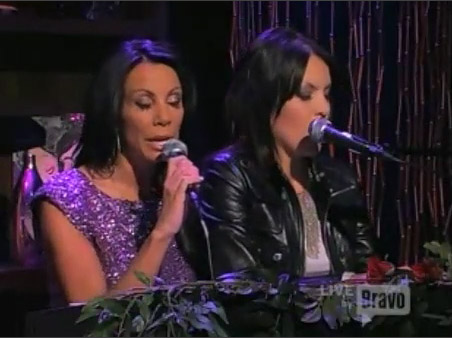 Danielle Staub joins the growing number of Bravo housewives hoping to cash in on their notoriety with a career in music. The controversial ex-convict and $ex tape star has recorded the song “Real Close” with lesbian singer/songwriter Lori Michaels and she tells People there are plans to release five different versions of the single.

Danielle Staub was on Andy Cohen’s Watch What Happens Live last night, and it was announced prior to the show that she would be performing the song, in its entirety, live on the show! Needless to say, I had my popcorn and beer ready to go and had settled in for what I assumed would be one of the most glorious train wrecks in the history of live musical performances!

I was almost as excited as Andy (No one can match his genuine and passionate joy for the Housewives!) when Danielle sat at the piano next to Lori Michaels and the notes began to play. Then Danielle began to sing. The popcorn fell from my gaping mouth. She wasn’t bad at all. Live. It was a slow love song with just piano accompaniment and Danielle was pulling it off!

Here, watch what happened live – the video and audio are a little out of synch, but the sound is good:

This doesn’t mean Danielle isn’t crazy and frighteningly dangerous, and it doesn’t mean I’ll be down at the record store ready to plop down $15.99 when her debut CD comes out, but it does mean that for the first time I have to give Danielle some props. Ummmm… Good job Ms. Staub.

Danielle’s foray into music follows in the footsteps of the trailblazing Kim Zolciak, whose addictive anthem “Tardy For The Party” became a huge dance hit for the wig-wearing mistress from Atlanta. That was followed by Gretchen Rossi’s “Nothing Without You” which managed to go relatively unnoticed, even among Housewives fans. Just prior to Danielle’s “Real Close” was Real Housewives of New York City’s Countess LuAnn de Lesseps, whose uber-autotuned “Money Can’t Buy You Class” became an overnight cult sensation thanks in part to a wonderfully stylized music video.

Is your iPod lacking the complete Time-Life Housewives Singles Collection? Here are links to all the songs available from amazon.com:

There isn’t a listing yet for Danielle’s single – I will try to stay on top of it and add one as soon as it appears! Meanwhile, keep checking the Watch What Happens Live website for video clips from the rest of Danielle’s appearance! Just as surprising as her not-bad musical performance was her completely calm yet terrifyingly enraged demeanor during the interview!

VIDEO: Golden voiced Ted Williams 2008 ‘I Got My Whiskey’ promo