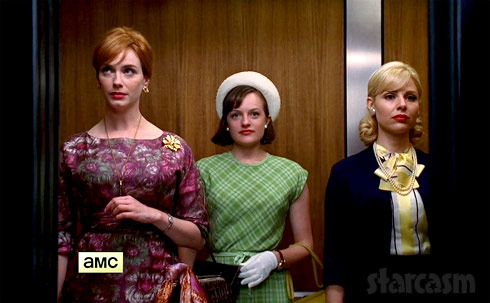 The final episodes of Mad Men are fast approaching as the second half of the critically acclaimed AMC drama’s seventh and final season is set to premiere April 5. In yet another tidbit to tide fans over until then, AMC released a brand new preview trailer today narrated in part by Don Draper and featuring the song “I Found You” by Alabama Shakes!

“Where do you want me to start?” Don asks at the beginning of the clip. “What’s your name?” a woman asks. “Donald Draper,” he lies.

Well, I traveled a long way
And it took a long time to find you…
But I finally found you…

Here’s the full Alabama Shakes song “I Found You:”

“Everyone has their own story to tell,” Don relays from one of his many reflections on advertising. “It only goes in one direction: forward.”

The narrator steps in and says, “On April 5 the final episodes of the four-time EMMY winner for Best Drama begin.”

Don intercedes, “It’s over when I say it’s over.”

And in case you missed the Mad Men video that Megan Draper animated gif was taken from, here it is in all of its 1970s glory complete with Diana Ross crooning “Love Hangover:”

Although she is definitely pretty in pink in that clip, the official Mad Men Season 7 promo photos of Jessica make the outfit white:

White or pink… we’re good either way. 🙂 #TeamMeganDraper (Although that ferocious plaid jacket you can barely see on Roger also has us squarely on #TeamRogerSterling as well!)

The second half of Mad Men Season 7 premieres Sunday, April 5 at 10/9c on AMC.

What can the Mad Men Season Six promo photos reveal about the new season?