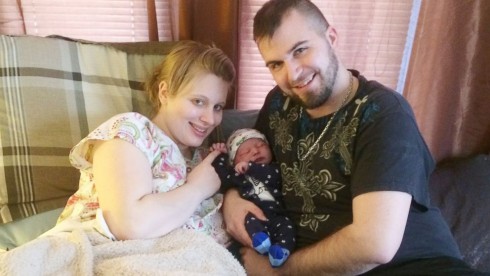 When Marines Brandon and Cynthia Ross took their 2-month old son to the ER with swollen legs, multiple fractures were found. Soon, Brandon was accused with child abuse and the couple’s two children were taken out of their custody. Now, Cynthia believes their son may suffer from a rare illness that caused the unexplained fractures.

Doctors immediately suspected child abuse, a phrase that Cynthia says was “surreal” to hear. “That’s not us. There’s just no way.” The pediatrician told her that these types of fractures were common, and it was also common for the non-abusive parent to not know about it. “Is Brandon some person that I’ve never met?” she wondered. “How did that happen under my nose?”

Ryder, who is now 1, and daughter, Rozalynn, now 3 are currently in the custody of Cynthia’s father, who is a registered foster parent. Cynthia is distraught over the situation because she loves being a mother, and wants as many children as she can have.

Right now 25-year-old Brandon, who was indicted in June, 2014, is facing 12 counts of child abuse, and possibly years in prison. Despite this, Cynthia continued to not believe that her husband hurt their son. She found to find a possible medical explanation for their son’s fractures. She wants to her children to be able to come home to her new home, where they have never spent the night. This is my new job. My new job is to re-unite my family,” Cynthia told 20/20.

Cynthia says their son Ryder has been diagnosed Ehler Danlos Syndrome, a condition that involves elastic skin, and flexible, but unstable joints, making the bones prone to dislocation. Cynthia found out about the condition when she saw a family in a similar situation to hers on Katie Couric’s talk show. An EDS diagnosed exonerated father Andrew Huber of child abuse in court.

Andrew Huber’s wife Bria had to fight, much like Cynthia, to prove that her husband was not a secret monster. “They thought that he was so in love with me that he was jealous of the time that Kenley took from him and so, therefore, he was taking it out on Kenley,” Bria Huber said. “They are telling me that this life that I’ve had for the past five years has been a complete sham and that basically my husband is, you know, a sociopath.”

Despite the fact that Ryder Ross has been diagnosed with EDS, the Maine case against Brandon is going forward. Although Dr. Michael Holick, of Boston, diagnosed Ryder, and stands by his claim that EDS leads to easy fractures, but not everyone in the medical community agrees that this is true. Still, Dr. Holick stands by his assertion. “I’ve seen over 1,000 of these patients, and even as adults, they’re at extremely high risk for fracture with minimum trauma,” Holick said. “So it’s not a surprise to me that just typical, normal, handling of the infant can result in these fractures.”

Brandon Ross is currently out on bail, and is awaiting trail.