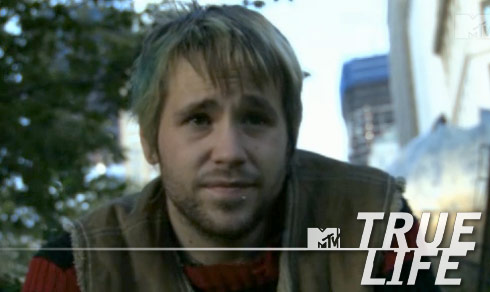 MTV wants to keep its fingers (and cameras) on the pulse of America’s youth, so it makes perfect sense they have chosen to use their True Life documentary reality series to try to capture a snapshot of life on the inside of the Occupy Wall Street movement.

The network has announced it will be airing True Life: I’m Occupying Wall Street on November 5 at 6pm. The one-hour documentary will feature embedded cameras with three Millennials – Bryan, Kait and Caitlin – “over a two-week period to capture the day-to-day realities of the protesters in New York City. The special aims to uncover some of the motivations that continue to drive these protesters.”

Bryan is one of the leaders of the Occupy Wall Street sanitation team “who joined the movement to express his own disgust with the relationship between the government and big business.” Bryan’s sanitation role takes center stage in the preview clip as the City attempts to use sanitation issues to evict the protesters from Zuccotti Park in lower Manhattan:

I’m not passing any judgment here, but did anyone else get the impression that this preview was like a macrocosm of those college buddies you let stay with you over the summer? Remember, your parents were coming in to town and you needed them to clean up their mess or else you were going to kick them out? I could just hear my buddies conversing after I presented the ultimatum…

“I know! We were going to clean up that day anyway. Jeeeez.”

It did seem to galvanize the troops to have a specific goal, though! I love this banner they had printed up: 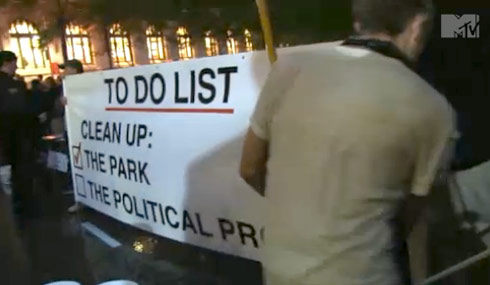 Also featured in the documentary are college students Kait and Caitlin who are concerned that they may not have good jobs waiting for them when they get out of college. “The cameras will follow the pair as they try to recruit their friends into joining the movement and face opposition, including possible arrest.”

The announcement from MTV comes just after it was discovered the network had been running a Craigslist ad looking for OWS protesters to participate in the next season of The Real World.

So what do you think of the True Life Occupy Wall Street episode? Will you be tuning in? (I know I will because although I am all about the anti-big business sentiment, I don’t really understand what these protests are meant to achieve. It all seems so vague from the reports in the media.)