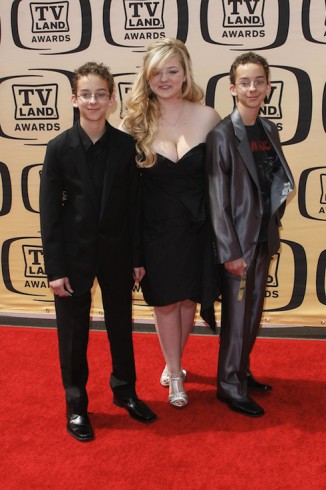 Sawyer Sweeten, whose career in show business began when he was just 18 months old, has died of a self-inflicted gunshot at the age of 19.

Sawyer (on the left in the above photo) and his twin brother, Sullivan, played Michael and Geoffrey on Everybody Loves Raymond for the duration of the show’s 10 season run. He was visiting family in Texas when, according to an anonymous source, “He went on the front porch and killed himself with a gunshot to his head.”

Sweeten’s sister Madilyn (in the middle of the photo above) confirmed the tragedy in a statement:

This morning a terrible family tragedy has occurred. We are devastated to report that our beloved brother, son, and friend, Sawyer Sweeten, took his own life. He was weeks away from his 20th birthday. At this sensitive time, our family requests privacy and we beg of you to reach out to the ones you love.

Patricia Heaton, who played the twins’ mother on Everybody Loves Raymond, was the first among the shocked cast to respond to the news.

Sawyer Sweeten was a funny and exceptionally bright young man. He is gone from us far too soon.

The entire cast of #EverybodyLovesRaymond is in shock. Prayers for the Sweeten family.

Was baby Ryder Ross abused by his father, or does he have a rare syndrome?