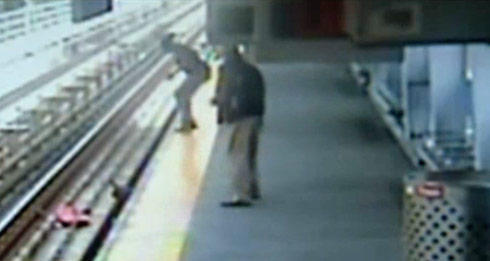 On Wednesday, surveillance footage caught an extremely dramatic moment as a 14-month-old child strapped into a stroller rolled slowly away from its mother and spilled onto the tracks of the Southeastern Pennsylvania Transportation Authority (SEPTA) transit system.

In the following clip you see the mother of the child, 28-year-old Temeka Greer, jump down and pull her child out of the stroller. Another person helped lift the child back up to the platform while yet another rider pressed a button on the emergency call box to notify the station.

While you see items careen out of the stroller, the child remained strapped in. This toddler was taken to an area hospital and treated for cuts and bruises.

“It’s a great story of people helping out someone in distress, the way the other passengers reacted and particularly the one who had the presence of mind to press the call button and help us get train traffic stopped so that nothing more serious happened.”

Busch added that Greer may have been distracted for a brief moment and taken her hand off the stroller handlebar. The stroller’s brake was not engaged. He also stated that the track’s third rail is electrified but that neither child nor mother came close to it.

Greer was not charged by police for any crimes.

Woman is selling her virginity to help poor people

Watch full episode of “16 and Pregnant – Where Are They Now?” Season 2b online