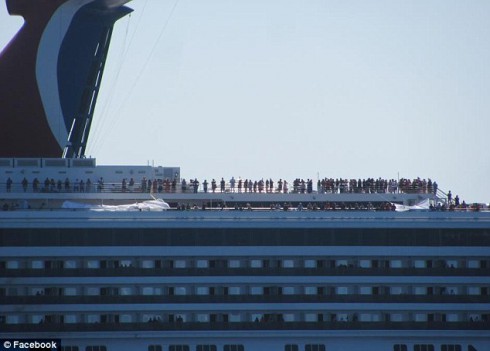 For passengers aboard the Carnival Triumph, what started as a relaxing vacation devolved into an ocean-locked nightmare on the third day of their four-day cruise. After a fire on Sunday in the engine room that cut off power, the massive cruise ship has been stranded in the Gulf of Mexico. According to limited passenger reports, conditions are worsening by the hour.

“Cabin carpets are wet with urine and water,” wrote passenger Debra Rightmore in a text to ABC before her phone signal faded. “Toilets are overflowing in the cabins, we are having to sleep in the hallways. Onion and cucumber sandwiches last night.”

Without power, the ship’s food supply has been compromised, sewage has backed up and people are being forced to camp on deck to get relief from the sweltering heat in their rooms. According to the Daily Mail, there are reports of “raw sewage running down the walls” as passengers have resorted to using buckets and bags as toilets.

“The odor is so bad, people are getting sick and they’re throwing up everywhere,” Brent Nutt, whose wife is aboard the ship, told CNN on Tuesday.

Although there have been reports of some passengers acting like “savages,” most are trying to keep their spirits up. David Raynes was onboard Carnival Legacy, a sister ship that was able to shuttle some supplies to the Triumph in spite of high winds and choppy water.

“The Triumph made a pass by us and the guests cheered and waved to us,” Raynes wrote on Facebook.

Carnival originally planned to tow the ship to Progreso, Mexico, but strong currents caused the ship to drift 90 miles north. Now it is being towed toward Mobile, Alabama at a rate of 6.9 mph. It is expected to arrive on Thursday, but conditions will certainly worsen before then as power remains limited.

“It’s ridiculous. Carnival has nothing at all in plan in case something like this happens,” Nutt said, even though a similar incident occurred on a Carnival cruise in 2010.

Passengers report that the crew has done a great job and that there is less chaos than on Sunday. Once they reach land, passengers will get a free flight home, a full refund for their trip and most expenses aboard and a credit for another cruise.

“All our guests are safe, and we’re doing everything we can to make them as comfortable as possible,” Carnival CEO Gerry Cahill said Monday night. “We’re terribly sorry for the inconvenience, discomfort and frustration our guests are feeling.”

Website accused of recruiting homeless to sustain beatings on video