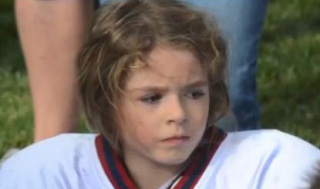 9-year-old Samantha Gordon got her start running from her older brother and his friends playing soccor at age 4, and is now the best player in her mostly boys football league. Girls have long been assigned to kicker when playing on a boy’s team, but Samantha gets in the thick of the game and pretty much takes over.

Weighing at 60 pounds, Samantha plays linebacker and running back, has scored 25 touchdowns. Not only does she outrun boys bigger and stronger than her, she tackles them.

Her proud father made a video of her best plays that’s now a sensation on YouTube.

“Some kids, right before the contact, they stop. I don’t. I just hit ‘em.”

While everyone’s jaws are dropping over the talent of this little girl, some critics are wondering if tackle football is too much for any child.

Sam’s dad himself has questioned himself about his promotion of her, but he’s not worried about her playing hard. He says she’s only been shakend up by a game once.

“With Sam, I keep questioning myself. Am I trying to make it something it’s not because I’m her dad? I asked my brother, ‘OK, am I just being a crazy dad here? Or is this really cool?’ “

Millions of people agree, Brent, this is really cool.

*The awesome video stopped working, but here’s a report from ABC until we find a better video: