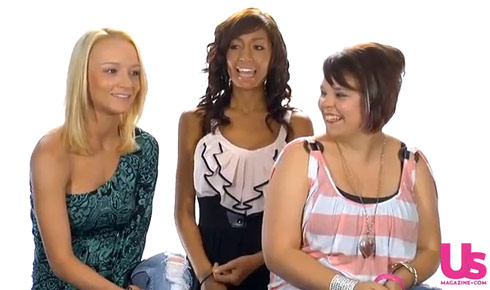 July 5th is the premiere of Teen Mom Season 3 and the girls are on a full-on promotional blitz! Earlier we shared an interview clip with Farrah Abraham in which she talked about having breast augmentation surgery and how that will be a big part of her storyline this year and now we have fellow stars Maci Bookout and Catelynn Lowell (and Farrah, too!) looking great and dishing on how they and their babies toddlers are doing in an interview for Us magazine!

Actually, the clip starts off with Farrah once again bringing up the fact that she had a boob job, so that is most certainly going to be a big thing this season. After that the girls give us updates on babies and baby daddies, including Maci who says her relationship with Bentley’s real dad Ryan Edwards is still difficult at times. “We’ll be great for seven days and be able to get along and then there’ll be that one day that’s just, like a nightmare.”

Maci goes on to describe how boyfriend Kyle King and her son Bentley are now inseparable “They paint a lot, and swim.. and eat popcorn,” she says.

Catelynn reveals she just saw Carly (her daughter who she gave up for adoption) and she’s now saying sentences, has a distinct personality and is making demands as far as what she wants to wear.

It then cuts back to Farrah who talks about the fact that Sophia has her own room now and it has been difficult getting her used to not sleeping with her mom.

The clip wraps up with Maci talking about Bentley’s choice of underwear – which is EXCLUSIVELY Thomas the Tank Engine – no exceptions!

As you probably noticed, fellow cast member Amber Portwood is absent from the clip. In case you didn’t know, the reason she isn’t present is because she is currently in Malibu, California where she has checked herself into a rehab clinic to help deal with her anger management and depression issues that contributed to her attempted suicide a few weeks ago.