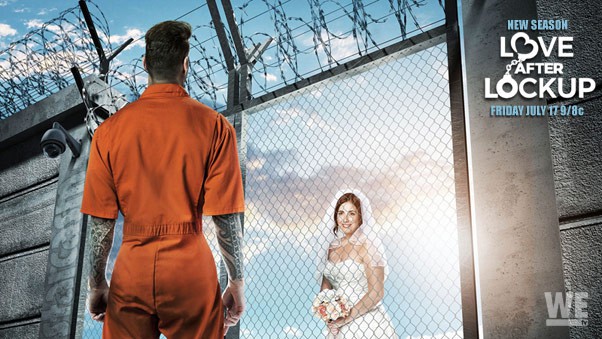 It’s been more than three months since the most recent season of Love After Lockup: Life After Lockup aired on WE tv. As a result, quarantined fans wanting their dose of post-prison romance and drama have been getting quite impatient! The network released a very brief preview clip for the new season of the original Love After Lockup in late March teasing a summer return, but it was mostly audio. Now we have a real deal preview trailer, as well as an actual premiere date!

WE tv aired the new preview trailer on television almost two weeks ago, and a very low quality version was posted by one of the new cast members on Instagram. We saw the post, but held off doing an article about it assuming that the trailer would be officially released online.

UPDATE – Here is the extended preview trailer, plus bios and photos for almost all the new couples!

For some reason, that still hasn’t happened. So, here is the really rough version shared by Jess, who is featured in one of the show’s trademark sexy times scenes towards the end of the clip:

As Jess states in the caption, the new season of Love After Lockup will premiere on July 17. I was able to confirm the premiere date and actually managed to find a little bit of info about the new cast!

According to the description for the premiere episode, the non-prisoner cast includes Jess (Jessica), John, Shavel and Scott. The only prisoner name we have is Quaylon, who is dating Shavel.

Scott plans to move more than 1,000 miles to be with his prison boo, John is organizing a pickup truck wedding, Shawn is willing to bet his 401k on his prison romance happily ever after, Jess is having issues with her family because she plans to marry a gang member, and Shavel’s family is also wary of Quaylon. That sounds like an amazing season!

We will keep an eye out for an official release of the trailer online, and we’ll update this post once it’s out.

Speaking of the new season of Love After Lockup, WE tv is causing quite a bit of confusion with their labeling. According to the network, there have only been two seasons and July 17 will be the Season 3 premiere. For some reason, WE tv lumps together the previous 39 episodes as Season 2, despite a cast turnover.

Love After Lockup Season 2 premiered in December of 2018 with Clint, Tracie, Marcelino, Brittany, Caitlin, Matt, Scott, Lizzie, Megan, Michael, and Sarah. (Angela and Tony were featured in the preview trailer, but due to his legal issues, they were pushed back until later.)

Season 2 took a break from March of 2019 until June of 2019 when it replaced Caitlin and Matt with Andrea and Lamar. That cast remained until August 9.

On August 16, the show introduced a completely new cast, plus the return of Angela and Tony. Despite the new cast, WE tv refers to the stretch of episodes from August 16 to November 22 as either Season 2b or Season 2c instead of Season 3. It makes it very difficult for fans (and websites) to talk about the show, or to even promote the new season.

*NOTE: Top photo is a WE tv promotional image from Season 2 featuring models and not cast members.