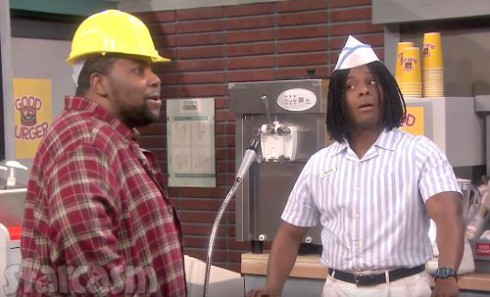 Aw, here it goes! Kenan Thompson and Kel Mitchell finally reunited on Wednesday’s episode of The Tonight Show With Jimmy Fallon, to the serious delight of ’90s kids.

The reunion was especially exciting because Kenan and Kel have reportedly been feuding since both auditioned for Saturday Night Live and Kenan was picked. Those rumors picked up steam in 2012 when Kel told TMZ his old co-star “does not want to be seen with me in any form of media, or even have my name mentioned around him.” He added, “There is no bad blood on my side, I’m not declining a reunion, I know the fans love the show and would love to see some type of appearance with us….I just don’t see that ever happening because of how he really feels.”

The pair had the chance to reunite in 2014 when one of the Kenan and Kel producers earned a lifetime achievement award at the Nickelodeon Kids’ Choice Awards. But Kenan didn’t appear and didn’t even acknowledge Kel in a pre-recorded video message that aired. Despite that, Kel said he was still up for a collaboration. Later that year, he told The Huffington Post “there’s no beef” with Kenan.

For a Good Burger-themed skit, Kel (as Ed) is up to his old antics of serving almost exactly what the customer didn’t order. After a few disgruntled patrons come and go, Kenan (as Lester Oat, Construction Worker) tries to place an order…but just winds up confusing poor ol’ Ed.

Hint: Be sure to watch to the end of the video for a rendition of “I’m a Dude, She’s a Dude.”

Are Madison and Tony from The Real World: Skeletons still together?

What happened to Zach and Jenna from MTV’s The Challenge? Are they still together?