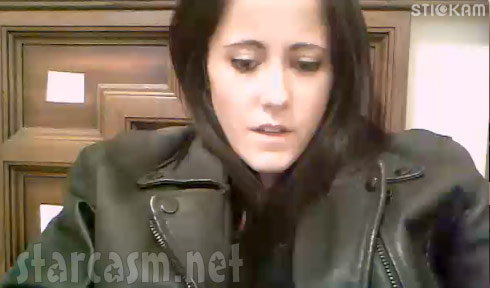 Late last night Teen Mom 2 star Jenelle Evans and her husband Courtland Rogers both took to the live video chat site stickam to give their sides of what happened that led to their split, Jenelle’s trip to the hospital, and her bringing charges of assault against Courtland.

Jenelle was actually at ex-boyfriend Gary Head’s home and appeared on his stickam account. She was off to the side for most of the night as Gary went back and forth with Courtland, but after Courtland signed off and Gary stepped out to get apple juice and Cheerios, Jenelle took the computer and talked directly to fans.

(My apologies for the audio being a little off from the video and there’s a slight feedback echo — that’s exactly how it was.)

Jenelle starts off by addressing Courtland’s comments from earlier in the evening when he said he and Jenelle sold her pregnancy story for $20,000 and split it down the middle. “Courtland said I gave him ten grand? No I didn’t, ” Jenelle says to start out.

She then apologizes for her appearance, saying, “Sorry my makeup is messed up. I cried earlier.” She’s referring to a moment earlier in the evening when Courtland gave details about her alleged drug use, at which point Jenelle was seen visibly upset as she left the room.

“Yeah, I know. It’s been horrible,” she says of the last couple days. “I mean I just came up here [to Gary’s place] just to see a friend, and I needed to get out of town because I was stuck at my mom’s house, and I was alone.” She says she could only think about all that had been happening to her and “just how mad I am and what I’m going through right now.”

Jenelle is then apparently asked whether or not Courtland has her bank car, to which Jenelle emphatically declares, “Oh, he doesn’t have my card, I have my card. But it was two days ago when he had my card.”

“Oh my god, I… You guys, I’m just so…” Jenelle emotionally tries to explain, before trailing off.

The subject of the ATM card is brought up again. “Cancel the back of the card? Yeah, but he can’t get in the ATM without my card. Right?”

The questions go back to Courtland. “Do I regret marrying Courtland? [inaudible]” Someone must mention something about Jenelle’s rather unimpressive track records with boyfriends and their economic standings and Jenelle admits, “I know! The only person that’s ever had a job of any of my ex-boyfriends is Gary.” At this point she just has to laugh a little. She later adds, “It’s better when you both have a job because you don’t have to worry about people taking your money because they have their own.”

But as it turns out, the whole ATM issue might be moot anyway. “I don’t have any money in my account,” Jenelle says. “I didn’t give him ten grand. He took two hundred dollars.”

At this point Jenelle begins to read a Facebook message from one of Courtland’s exes and Gary returns with the apple juice and Cheerios. Jenelle passes the computer back to Gary, who is sporting one of the most amazing hats of all time, and the clip ends.

CLICK HERE for Courtland’s stickam session with his new girl Tiffany, apparently recorded in a hotel room in Cincinnati.

UPDATE – Here is the complete session in four parts. WARNING! These clips do contain some profanity!