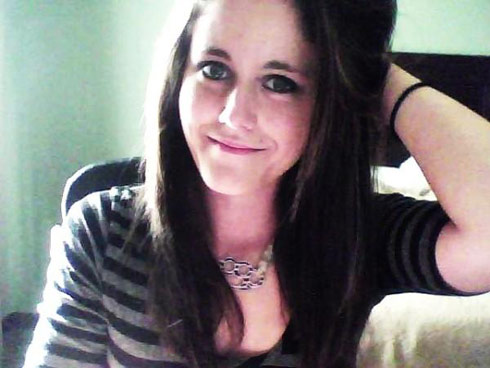 Troubled Teen Mom star Jenelle Evans seems to finally be taking her self-destructive ways seriously as she has reportedly checked herself into a rehab facility in Malibu, California! The move was not ordered by the court but was apparently a decision made by Jenelle in an attempt to straighten out her life and hopefully regain custody of her son Jace.

Jenelle had been dropping not-so-subtle hints online including this message on Facebook on May 7:

And then she tweeted this the same day:

@sweetiepieaims oh well.. im not going to have social networking and my phone for a while sooo no one will hear from me

And here’s a photo of Jenelle on the plane headed to rehab with a brace on her arm, which she reportedly (as in Jenelle fans online) hurt punching a wall after yet another argument with her mom Barbara: 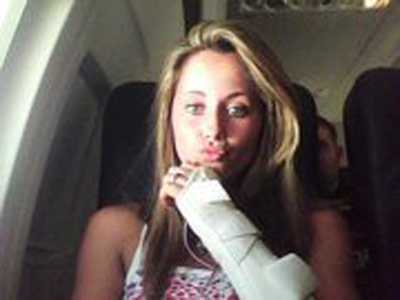 Her friend Patrick Jay Williams talked with OK! magazine and wants to point out that the rehab wasn’t for a drug addiction. “She’s been clean for weeks, so the rehab isn’t so much about getting sober,” he explains. “It’s more about her needing to find ways to deal with her anxiety and stress.”

Although Jenelle isn’t currently using drugs of any kind (both of her recent tests came back clean) that was how she used to deal with stress. “She tries to find relief by using pot and Ecstasy,” continues Patrick. “When she takes Ecstasy she gets the feeling that everybody loves her. And in truth, on the island, a lot of people hate her.”

Jenelle can’t be anywhere near drugs or alcohol because of her probation after pleading guilty April 14 to possession of drug paraphernalia, and there was little chance for Jenelle to do anything under the radar because her probation officer lives on her street. Add to that numerous other court appearances and a break up from boyfriend (and bad influence) Kieffer Delp and Jenelle must have been desperate to find some sort of method to deal with the stress and anxieties she felt.

Patrick says Jenelle “wants the next 45 days to just get her head on straight and to be far away from her mom and Kieffer and all the pains of her life.”

I think this is all fantastic news! As I mentioned recently in my Mother’s Day post I like Jenelle a lot, but she’s made a lot of bad decisions and surrounded herself with a lot of destructive people. Add to that a huge amount of pride mixed with insecurity and you’ve got an extremely unhealthy mixture.

Perhaps the greatest sign that this might be the life-altering event Jenelle needs are these words from her friend: “She wants this. She wants to grow up. She wants to find a better way of life.”

The internet will be a much less entertaining place for the next 45 days, but I couldn’t be happier for Jenelle – and Jace for that matter! Congratulations ot her for making such a tough decision.