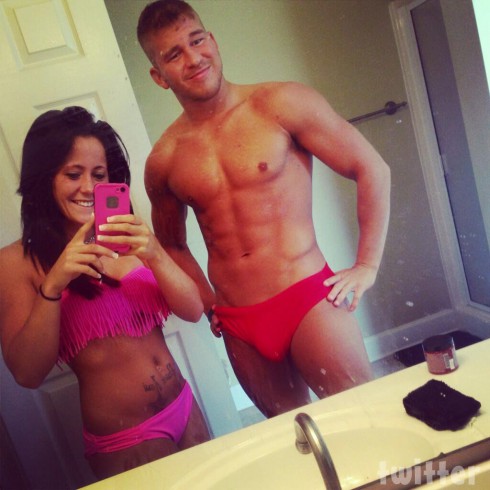 This weekend Jenelle Evans’ boyfriend Nathan Griffith was pulled over and charged with driving under the influence as well as resisting arrest, speeding, driving while suspended, and driving on the wrong side of the road. Today the police dashboard camera video of the arrest made its way online and in Jenelle explains why Nathan was driving so erratically by saying, “Honestly, we were trying to have sex.”

Here are a few more bullet point highlights from the clip, which features just Jenelle and her conversations with officers on the scene:

• Nathan tried to “fight” with the arresting officers, which would explain the resisting arrest charge.

• When asked how much she has had to drink, Jenelle says, “Uh, a shot, maybe two, maybe three drinks.”

• At one point the officer asks Jenelle, “Are you going to be on MTV?” to which Jenelle responds with, “Yeah. Unfortunately,” before laughing.

• Jenelle claims that she was completely unaware that Nathan didn’t have a valid driver’s license. She says he told her he got it reinstated in 2010.

• Officers apparently found a number of pills in the vehicle and Jenelle says they were Nathans and she has “no idea” what they are. She then says they’re prescription pills for her brother or something. (The audio is a bit hard to make out)

Also, WBTW apparently got their hands on the arrest report because they have more details about what happened. The whole thing started when a motorcycle police officer observed Nathan driving a 2007 Toyota at 51 mph in a 40 mph speed zone. The officer followed Nathan (we assume with lights flashing) to his and Jenelle’s house where he pulled into the driveway, got out of the car, and began to run!

Nathan was eventually caught by police, at which point they reportedly threw him to the ground and handcuffed him. Police say that Nathan WAS tasered during the incident!

As you will see in the dashboard video below, police found a number of pills (12 to be exact) in the vehicle, but according to WBTW, “they were later determined not to be narcotics,” and thus Nathan and Jenelle did not receive drug charges. The site says the DUI was Nathan’s 3rd offense, though it was previously reported to be his second.

Here’s the dashboard cam video followed by a complete transcript:

OFFICER: Hey, how are you doing?

OFFICER: Are you OK?

OFFICER: Do you live at this house?

OFFICER: Alright. How much have you had to drink tonight?

OFFICER: How do you know him?

OFFICER: OK. Where did you guys go?

JENELLE: We went to Molly Darcys, and we had, like, two drinks, and, like, uh, two shots.

OFFICER: That’s all you had to drink?

OFFICER: And why was he trying to fight with the officer?

OFFICER: Why was he trying to fight with our guys?

JENELLE: I have no idea. He was trying to, like, get focused on going home.

OFFICER: Why was he trying to focus on getting home?

JENELLE: I don’t know, because…

JENELLE: Honestly, we were trying to have sex.

OFFICER: That’s why you guys were all over the road?

OFFICER: OK. Now, so he was actively…

OFFICER: So he was driving the car and he was trying to touch you?

JENELLE: No, no, no! He wasn’t trying to touch me.

OFFICER: You were in a hurry to get home to have sex?

OFFICER: OK. Yeah, well, that’s not very good. Is there anything in this car that’s illegal?

OFFICER: You’re sure about that?

OFFICER: Do you have a key to get in the house?

OFFICER: Do you guys have any open containers in the car?

JENELLE: No. I promise you.

OFFICER: We will. We’re going to have to.

OFFICER: We’re going to have to.

OFFICER: How old are you?

OFFICER: Do you have any ID on you?

OFFICER: Can I see it, please?

JENELLE: He has it. Nope, it’s right here.

JENELLE: He might have it. Can you check that?

OFFICER: You want us to check this?

OFFICER: How much have you had to drink tonight?

JENELLE: Uh, a shot, maybe two, maybe three drinks. This is our house.

OFFICER: How long have you been dating him?

OFFICER: Are you going to be on MTV?

JENELLE: Did you find my ID?

JENELLE: He has it then.

OFFICER: He probably does.

OFFICER: You didn’t leave it in the car did you?

JENELLE: No. He has it. I promise you.

OFFICER: OK. Have you taken anything else? Any pills or anything?

OFFICER: Is this his car or your car?

OFFICER: OK. How long have you been living here?

OFFICER: You need to get your license plate changed, sweetie.

JENELLE: I know, I know! It’s just – I just moved here from – I moved from Wilmington, North Carolina to [???], South Carolina.

OFFICER: Alright. This is your car, and there’s nothing illegal in it?

OFFICER [different than before]: Hey, how are you?

OFFICER: My name is ??? with North Myrtle Beach Police, how are you today?

OFFICER: You’ve got a wristband?

JENELLE: I know cause…

JENELLE: No, he just wanted to get home.

OFFICER: He wanted to get home?

OFFICER: At what point and time did he know that I was behind him?

OFFICER: He didn’t say anything to you whatsoever?

OFFICER: Whose are those? Are those yours or his?

OFFICER: Those are his?

OFFICER: Whose car is this?

OFFICER: Whose car is this?

OFFICER: Did you know he didn’t have a driver’s license?

OFFICER: You had no clue at all that he didn’t have a driver’s license?

JENELLE: No. He told me he got it reinstated in [inaudible] Carolina, 2010.

OFFICER: Do you have the insurance and registration for this vehicle?

OFFICER: Can I see it?

OFFICER: What are all those pills, ma’am? [inaudible] those pills and don’t –

OFFICER: What are they?

JENELLE: I – I have no idea. Hold on. You got that, wait [inaudible]

OFFICER: Do you live here?

JENELLE: Yeah. I live in this house.

OFFICER: What are all those pills, ma’am?

JENELLE: Uh, they’re his. They’re, uh, they’re pershscrishu — they’re prescrip — that’s my brother’s for him, and uh, that’s [inaudible] in jail, unfortunately. You can search through that. Go ahead.

OFFICER: Well we are because [inaudible] arrest.