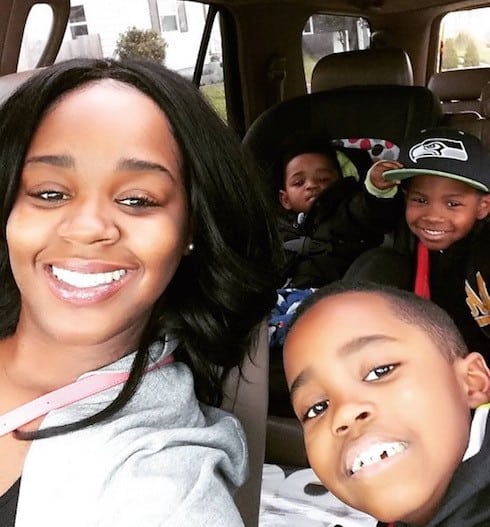 Jackie Christie’s daughter Takari Lee has not been shy about voicing her thoughts on her mom since the two had a major falling out last autumn–and Takari is increasingly willing to share stories of Jackie’s mistreatment when Takari was growing up to try and prove her point. She did so for the first time three weeks ago, during the publicity tour for Basketball Wives Season 6, by sharing several excerpts from her forthcoming memoir detailing what Takari claims was Jackie’s negligent and abusive mothering.

Then, after the first episode of the new season aired, Takari shared her response in a series of tweets, all of which continued her side of the GoFundMe debacle and fallout:

Besides @EvelynLozada did u check the very many other names that helped… We were just as much a stranger to them as we are to u.. #stopit

They should have made her tell the story of my sons accident. Oops! she doesn't know because to this day she hasn't asked #basketballwives

She would have been just as mad if it was $3.50… That's the hurtful part ..why do u care so much someone helped me? She didn't harm me.

Its only about a 1 hr weekly special to u… Its about everyday to me… We can do this ..but nobody is speaking for me anymore…

Looks like she made the birth of chani's child or at least tried to.. Nice!! That's progress I'm 0 for 3

And Takari hit back against Jackie again after last night’s episode aired:

My mom was in Washington when I had my first child… She never came.. She sent my grandma and sister. I hope she made it for Chani tho!

My kids do not recognize her lol..When I explain to them, I have parents, they are shocked. Especially my 6 yr old, He wants to meet her bad

I really wish I could have been a part of that time for Chani… It looked beautiful and I know she was happy.

Plus, as VH1 itself pointed out, both Evelyn Lozada and Tami Roman went in on Jackie on social media after last night’s episode aired. Evelyn struck first, taking offense when Jacking said she’d left a “messy” comment for Takari:

My so called messy comment to @takari_lee #basketballwives ??‍♀️

And Tami went a lot farther–though she also deleted her post. Fortunately, The Shade Room got a partial screencap beforehand, and VH1 provided her full caption, which we’ve reprinted below:

To be clear Jackie Christie called ME and had a lot to say – despicable mother came from her and I repeated it. She asked to see the post and asked what were Evelyn’s intentions – I sent her the post via DM which was already on The Shaderoom, so no secret there…I also said Evelyn’s comment was sweet but I didn’t know her intentions (which was an answer to the question Jackie asked me in a phone conversation) I also told Jackie my issues with Evelyn is NOT her issue and to spend time with her and form her own opinion. Of course that was edited out. As it pertains to this “baby situation” it was brought to me, within a storyline, I could care less. I won’t perpetuate this BS and I will NOT allow ppl to continue to portray me as a bad person. It sucks, it’s draining and tiresome to have to rebuild based on lies, poor editing and overall BS.

At this point, it looks like the feud between the three cast members (and four people, considering Takari is at the heart of the matter) is going to dominate Basketball Wives‘ sixth season the same way Kirk Frost’s affair and baby mama are dominating LHHATL this year. So it’s probably worth pointing out something we also said yesterday: Jackie’s official bio for the season suggests that her storyline does not end well, and that some of her oldest friendships are stretched to their breaking point or broken outright.