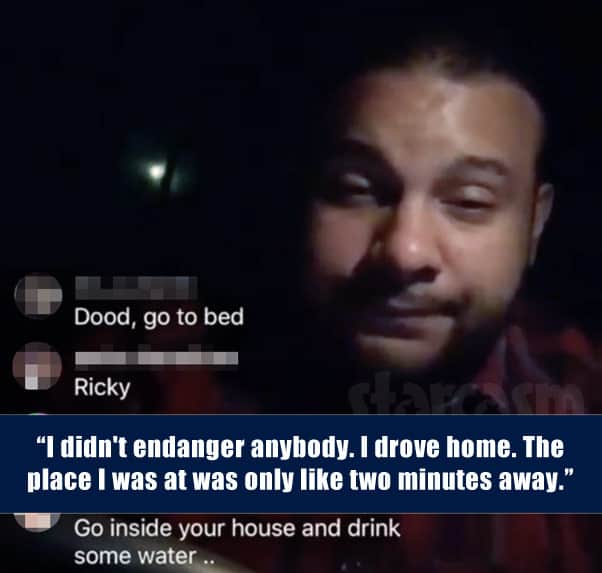 90 Day Fiance: Before the 90 Days star Ricky Reyes is once again receiving a ton of backlash, this time for going on Instagram live appearing to be very drunk and admitting that he drove home from the bar he was at.

In the clip, Ricky is slurring his words and appears to be struggling to keep his eyes open as he talks with live stream viewers from the driver’s seat of a car. After apparently being accused of endangering other people’s lives by driving home while intoxicated, Ricky was aggressively defensive.

“You know what? F**k you,” Ricky says to the viewers in the clip included below. “I didn’t endanger anybody. I drove home. The place I was at was only like two minutes away.”

He then seemed to rethink his defense a bit. “Well, I guess you’re right, alright. I’m just being stubborn. I guess, you know, technically I endangered somebody else’s life.”

Ricky continues: “I’m home. If you want to speak that way, I gotta be truthful, right? Some technicality there. All you motherf**kers always technical about some bulls**t! Every time. Every time! You guys point out the craziest sh*t. F**k you guys!”

Here’s a clip from his live stream, but be warned (as evidenced by the transcription above), there is some foul language.

Ricky has been having some difficult times since his appearance on 90 Day Fiance: Before the 90 Days. After briefly reconciling with his wife Natalia, they later split — and it was apparently not amicable. Natalia filed for divorce on June 17, and she currently has a court order in place preventing Ricky from seeing their young daughter Kira.

Back in March, Ricky checked himself into a mental health treatment facility. “Officially lost it, my will and strength,” Ricky’s posted on Instagram just before admitting himself. “Will be gone for [a] couple of days…I’m upset at myself for losing composure…Need to make finer adjustments…Bye.” The post was accompanied by a cover of the Trent Reznor song “Hurt.”

Ricky has recently stated that he has an attorney and plans to fight the court ruling preventing him from seeing his youngest daughter, but live streaming after apparently driving home intoxicated from a bar will not help his case.

BEFORE THE 90 DAYS Ex-wife accuses Geoffrey Paschel of reselling prescription opiates, using his children as a ‘cover’ or ‘mule’