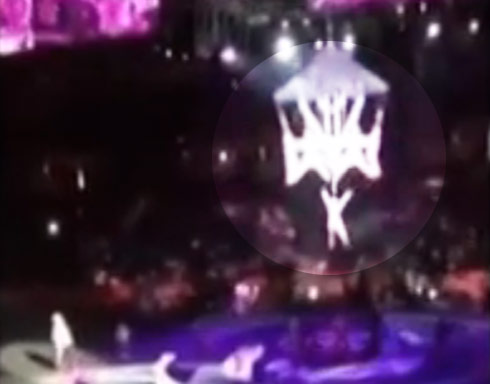 The “hairialists” had been hanging from their hair in a hovering set piece made to resemble a chandelier during the 11:00 AM performance yesterday.

The incident happened so quickly it left many in attendance wondering at first if it were an accident or not. An audience member caught the scary scene as it unfolded on video:

Since the accident, Ringling Bros. circus has issued a statement about what transpired:

During the 11am performance of Ringling Bros. and Barnum & Bailey® PresentsLEGENDS℠ on May 4, 2014 at Dunkin’ Donuts Center in Providence, Rhode Island, there was an accident during the hair hang act. All performers in the act received immediate medical attention and were transported to a local hospital for further care.

The 11am performance was stopped at that time. Performances scheduled at 3pm and 7pm on May 4 and at 10:30 am on May 5 have been cancelled. An investigation has begun into the cause of the accident, no further details are available at this time.

For all performances, all purchased tickets can be refunded at the point of purchase location. Any tickets that were purchased through Ticketmaster will be automatically refunded.

All of us at Feld Entertainment appreciate everyone’s thoughts and prayers for our performers, and we are sharing all of those with them as they recover.