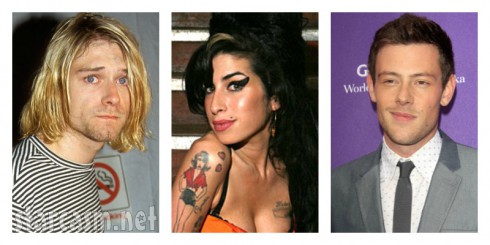 Today is the second anniversary of Amy Winehouse’s death. Yet, in many ways, her passing feels even more tragic as we go on longer without her talent. That’s because, unlike when older celebrities die, we feel much more robbed when young entertainers die… It’s easy to wonder what else they could have contributed had they only lived longer.

Because the deaths of young celebrities carry such a different kind of weight, it’s natural to think the tragedies are relatively common. However, as Ask Men discovered, the passing of notable celebrities before the age of 40 is pretty rare: In the past 63 years, only 103 celebrities earned that undesirable distinction. That averages out to be 1.63 young celebrity deaths per year.

It’s also interesting to consider the smaller sample period of time since Amy’s death and today. In the past two years, Cory Monteith is the only other notable celebrity to have passed away before the age of 40.

Although there is not a parallel study for the general population, the Centers for Disease Control found the five leading causes of death for people aged 10-24 years old are: Unintentional injury, suicide, homicide, cancer and heart disease. As the CDC classifies drug overdoses as “unintentional injuries,” is difficult to make a direct comparison. Still, it seems that there is a higher rate of homicide and a lower rate of suicide among celebrities who die young than their public counterparts.

Regardless of status and the cause of death, it is obvious that the deaths of young people hit us all particularly hard. Thankfully, those are tragedies that most of us don’t have to suffer very frequently.

Lawsuit claims popular musicians smoke pot in the studio, no one is surprised