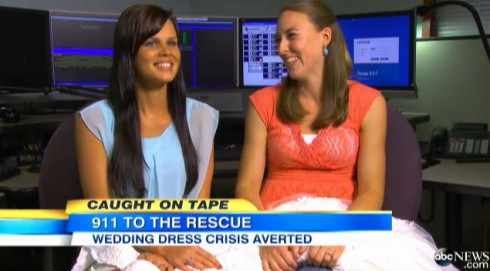 One bride’s wedding day experience went from nightmarish to miraculous all in the course of one phone call.

Amanda, a bride-to-be from Washington, was packing up her car before heading to the church for her wedding on August 11. When she ran back into her apartment to fetch a few last things, a thief stole Amanda’s wedding dress from the unlocked car. Distraught to see someone driving away with the dress she planned to wear later in the day, Amanda frantically called 911.

“I’m calling to report my stuff stolen,” Amanda said on the 911 tapes.

“I’m sorry, you said your truck was stolen?,” the dispatcher asked.

“No! I’m trying to… My… My wedding dress,” Amanda said in between tears.

Little did she know, the wheels were already turning in the dispatchers’ mind. The woman on that end of the phone, 28-year-old Candice, got married just 18 months before and still had her own wedding dress.

After asking Amanda’s size, Candice realized her own dress would be a good fit. With her supervisor’s permission, Candice texted a picture of her dress to Amanda and offered to let her borrow it for the rapidly approaching ceremony.

“It was just an immediate reaction,” said Candice told ABC News. “I’ve been a bride so I can just put myself in her place about how horrified she would be. That’s kind of the biggest part of the wedding.”

Amanda admitted she was stunned by the offer, but quickly took Candice up on it. Hours later, she walked down the aisle in the borrowed dress, which seemed to fit as perfectly as one that had been custom-made.

“I want you to know you’re seriously an amazing person and not a lot of people would have done that,” Amanda said to Candice when they met for the first time, days after the wedding.

Still, Candice insists they both gained from the experience.

“It feels so good she got to have a wedding dress on her wedding day,” Candice said. “I’ve been a bride and I know that it’s awesome. I made a new friend today.”