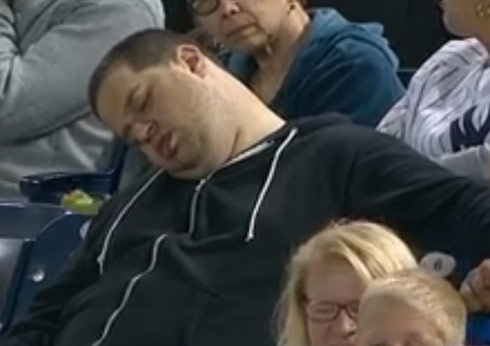 Andrew Rector decided he’d take a little nap during a recent Yankees-Red Sox tilt. As he slept peacefully in his seat at the game the folks withe ESPN, who were televising the game, took notice so the game announcers had a little fun at Rector’s expense during their call.

It was all pretty regular “hey look at this funny thing happening in the stands” baseball banter but Rector found being singled out so offensive that he decided to sue ESPN and the announcers to the tune of $10 million.

In his complaint obtained by TSG, the 26-year-old argues that he was subjected to an “unending verbal crusade” by ESPN announcers Dan Shulman and John Kruk.

In addition to ESPN, Shulman and Kruk – Rector also lists MLB and the New York Yankees as defendants. MLB included footage from the call of their game in a video posted to the league’s official website.

Of course internet commenters (not always the most judicious bunch) had some fun at Rector’s expense under the video and he seems to attribute their negative feedback to the team of Shulman and Kruk as the suit reads that words were used like “stupor, fatty, unintelligent and stupid” against Rector.