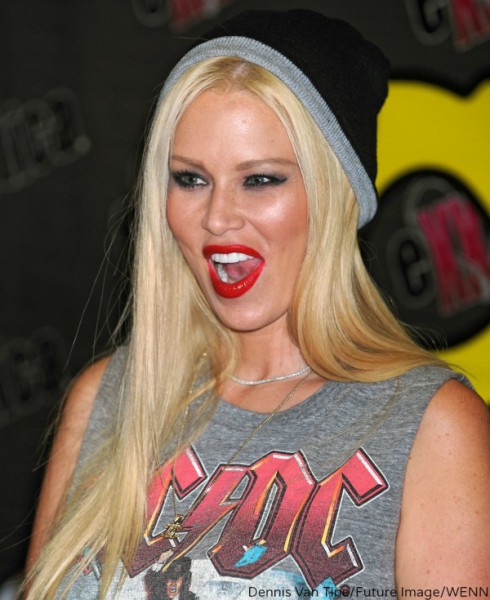 Back in August, we reported a blind news item about a “middle-aged, world-famous film actress” who was filmed nearly overdosing on a lethal combination of pills and alcohol. Now it seems Jenna Jameson may be the “actress” in question.

In a video leaked to YouTube on Nov. 15, the noteworthy adult film star is seen drinking, taking pills and smashing cameras.

“All in front of her boys. These are some of the reason why Tito Ortiz has full custody of those boys,” wrote the YouTube user, Dave Delino. The 13:55-minute video was the only that “Dave Delino” has posted.

Many of you guessed that Jenna was the “famous actress” from the original news item. Indeed, she met many of the clues provided by the original blind news provider: she lost custody of her kids, her mother died when she was young and she shared a home with Tito Ortiz. However, the clue about winning “major international awards” led many to believe it was an Academy Award-winning actress… Not an XXX-award winner. (Personally, I feel a bit duped.)

It also seems that the video released wasn’t the exact one referenced in the original blind item. That story said the footage was from a disgruntled former assistant who took the film on a cell phone.

Jenna, who recently said she plans to go back to her old career in order to support her 4-year-old twins, told Radar Online that ex-partner Tito was the only one who had access to the footage.

“The footage that was taken, I have no idea that there were cameras in the house and then I finally found out through my nanny, she told me. And I was livid. Because it’s illegal. You cannot do that. You cannot film someone without them knowing. So I brought a ladder up, and I smashed them.”

Jenna denied that she was drinking alcohol in the video, explaining she was guzzling from a bottle of water. She also denied Tito’s claims from October that she hasn’t attempted to see the kids in months and added Tito is the one who “needs rehab.”

“He took my money, he took my cars, he took my home and he left me without anything. So what I had to do was start completely over. So that’s exactly what I did. I went out and I work and I’m making my money,” Jenna said. “I just bought my brand new car, I have my brand new house coming next week and I will have my children and it will only be probably a couple weeks, because the only person that’s taking care of those children is the nanny.”

Which major celebrity announced she’s pregnant with throwback photos and a bun in the oven graphic?

Jenna Jameson talks realities of body image and drugs: ‘I was worried I couldn’t lose the weight sober’