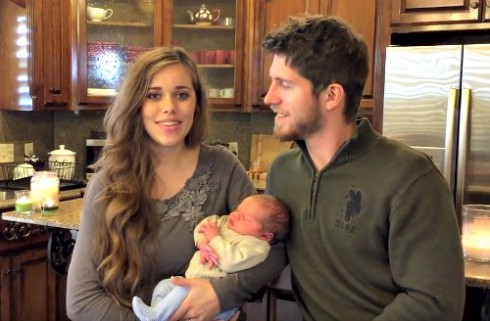 Hopefully you didn’t bet on what 19 Kids and Counting‘s Ben and Jessa Seewald were naming their firstborn — because chances are you were totally wrong! Nearly one week after the little guy was born, the new parents announced they had settled on the name.

“We’ve been working on deciding on a name and we finally figured it out,” Jessa said in a new video. Ben then picked up to add, “His name is Spurgeon Elliot Seewald.” Yes, Spurgeon!

Ben explained they were inspired by Charles Spurgeon, a British Baptist preacher from the 19th century. The name isn’t in the top 1,000 registered with the social security administration for any year since 2000. The more common middle name is a tribute to Jim and Elisabeth Elliot who served as missionaries in South America. And on top of all of that, Jessa said the couple uses the nickname “Quincy” for the baby, which they bestowed upon him early in her pregnancy.

During Jessa’s pregnancy, the couple asked fans to weigh in on what they should name the baby. The top suggestions for a boy were Luke, Zachary, Sawyer, Noah and Benjamin — with no Spurgeon in sight!

Now that they’ve settled on a name and Jessa is home from the hospital, they can begin to settle into life as a family of three. Some of that will be shown in the upcoming TLC specials Jill & Jessa: Counting On.

Exclusive Photo Of Amy Poehler And Will Arnett’s Baby Boy!