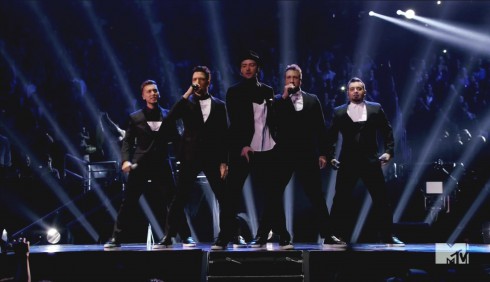 Justin Timberlake won the Michael Jackson Video Vanguard Award last night after performing a long, impressive medley of his hit songs over the years. For a brief segment of that medley his old pals from ‘NSYNC joined him on stage for a reunion that melted nostalgic hearts of young women everywhere.

JC Chasez, Lance Bass, Joey Fatone and Chris Kirkpatrick rose out of the ground to join JT on Girlfriend and Bye, Bye, Bye. Sure, their moves weren’t always perfect, but that didn’t take away from the exciting energy of the highly anticipated moment.

“It was just a matter of time. Everybody would ask us, ‘When are you guys going to do something?'” JC said this morning on On Air with Ryan Seacrest. “First of all, it was the worst-kept secret ever, [but] Justin gave me a buzz and he said, ‘Hey man, listen. I’m getting this award and they have given me a pile of time to perform and we started our careers at MTV and I think we should get the band back together.”

Thankfully Taylor Swift was in the front row with pal Selena Gomez having an ecstasy attack over the whole thing, acting out on television the cathartic experience everyone at home was having. We’re just thankful they didn’t cut away to Miley Cyrus and whatever her foam finger were doing at the moment. 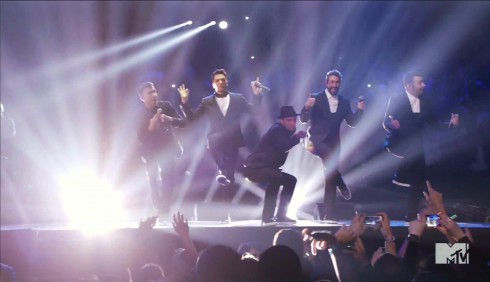 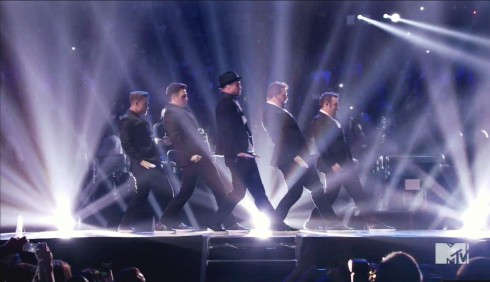