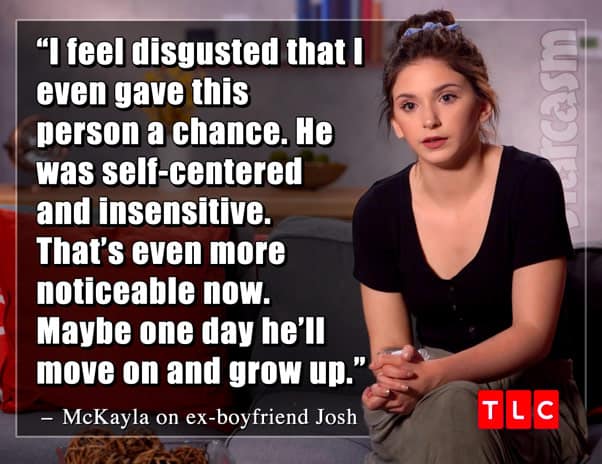 On Sunday night’s episode of TLC’s Unexpected, fans got to see show OG McKayla Adkins reveal that she was officially moving on from her children’s father Caelan Morrison. McKayla officially dating someone else is pretty huge for the 19-year-old mother of two because she and Caelan have been on-and-off since she was 14!

McKayla and her new ex-boyfriend Josh dated for roughly six months, but things apparently ended on a very sour note earlier this month. “I can now see clearly that getting into a relationship with someone was a huge mistake,” McKayla tells us. “I trusted this person for 6 months and tried growing a bond with him. I can now see I was being used so he could get some sort of following or attention.”

McKayla continues by accusing Josh of stalking her online after their split and spreading lies about her and Caelan. “It’s sad the lengths this person is taking to be noticed and the fact that he’s a 24-year-old acting like a teenager,” McKayla continues. “He’s keeping up with my life online and commenting on anything he can for whatever reason. He’s spreading lies about me and Caelan on the internet, once again for attention. I feel disgusted that I even gave this person a chance. He was self centered and insensitive. That’s even more noticeable now. Maybe one day he’ll move on and grow up.”

We reached out to Josh to see if he wanted to respond to McKayla’s description of him and their relationship. “I never wanted any following,” Josh tells us. “That is why my profile has been private since we started dating, and why I made sure that she didn’t tag me in any Instagram posts.”

Josh continues by insisting: “Nothing I ever said was a lie.”

#Unexpected mom @mckayladkinss reveals that she has been struggling with depression and anxiety, she's broke, she's probably dropping out of college, and she's looking for a job. https://t.co/GwUrF8sFNH

I’m uncertain what information Josh has been posting online because he has yet to accept our Instagram friend request. (There’s nothing on his Twitter account about McKayla or Caelan after the breakup.)

Speaking of Josh’s Instagram account being private and our friend request still in limbo, I can confirm what Josh says about avoiding attention on social media. After it became clear that he and McKayla were dating back in March, I did a post about it. I had a lot of difficulty finding out much of anything about him.

I asked Josh why he wasn’t on the show, and he said that producers tried numerous time to convince him to appear. “TLC made me multiple offers to be on the show, but like I said, I didn’t want the attention and turned them down.” Josh then admitted he didn’t completely turn them down, but instead “countered with an unrealistic offer of $50K.” He tells us “the only way I would consider doing it was if they gave me enough to pay off my student loans and have some spending money left over. They weren’t very fond of my offer.”

TLC continued to haggle. “After multiple tries they made a final offer of $500 to just film us walking out of the door leaving for church just to show that she had ‘moved on’ (I’m assuming to be in last week’s episode) to which I, clearly, declined again,” Josh says.

Producers reportedly made one last ditch effort in hopes of getting Josh to go to the Unexpected Tell All taping in New York City. “They offered to fly me out to New York for the Tell All and give me my own room,” he reveals. “I’m assuming they were going to pressure me in person to do an interview or something, I don’t know why else they would offer me that. Anyways, I declined the offer because I didn’t want to take Friday off of work and spend my weekend in a studio.”

Meanwhile, McKayla has confirmed that she and Caelan are indeed back together. “I’m getting to know Caelan again and he’s a completely different person,” McKayla says. “Caelan is there for his kids now and he’s kind. He’s there for me and he’s proven to me that he really wants to put in some effort and be a good dad and boyfriend.”

McKayla insists that she is still being at least a little cautious. “We are taking things slow and getting to know one another again. We are working through our issues. I’m proud of Caelan and where he is now. People need to give him more credit.”