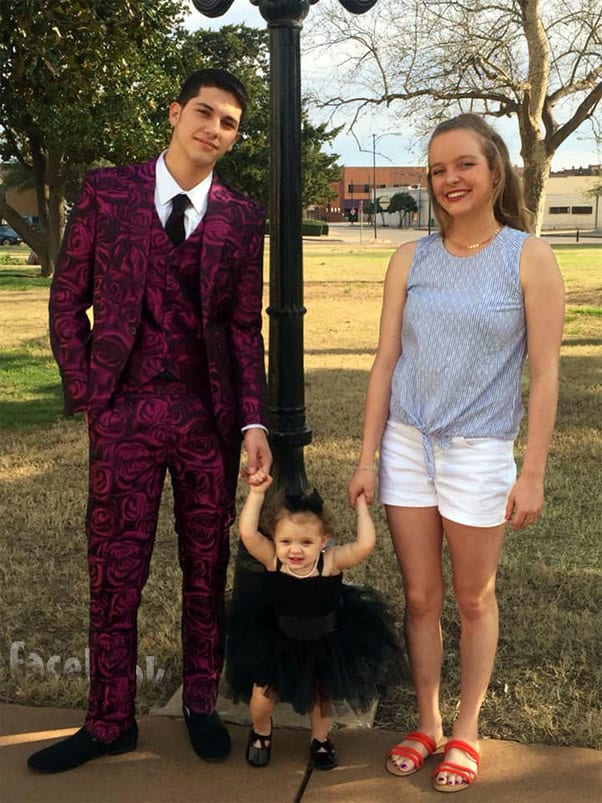 Fans of the TLC reality series Unexpected were a little shocked this weekend when photos surfaced online of estranged exes Emiley Noack and Diego Reyes posing together with their daughter Aria, who was all dressed up to go to prom with her dad. But, as you can easily ascertain based on the fact that only Diego is dressed up, Emiley was not attending. However, the photo certainly seems to indicate that the two parents are getting along MUCH better these days — which Emiley confirms in a new YouTube video.

More from Emiley in a minute. First, we simply HAVE to take some time looking at photos of Aria and prom date dad Diego! Actually, given that she is with Diego, I suppose we should refer to her by his preferred name of Beckett. 🙂

As far as their prom attire, Beckett was decked out in a frilly black dress with a matching black bow and a string of pearls. Diego once again went with a floral theme (see his 2018 floral prom look below), but this time his tuxedo was ALL flowers — including the jacket, pants, and vest! In addition to the floral suit, Diego also brought along a rather sizable walking stick topped with a large jewel. 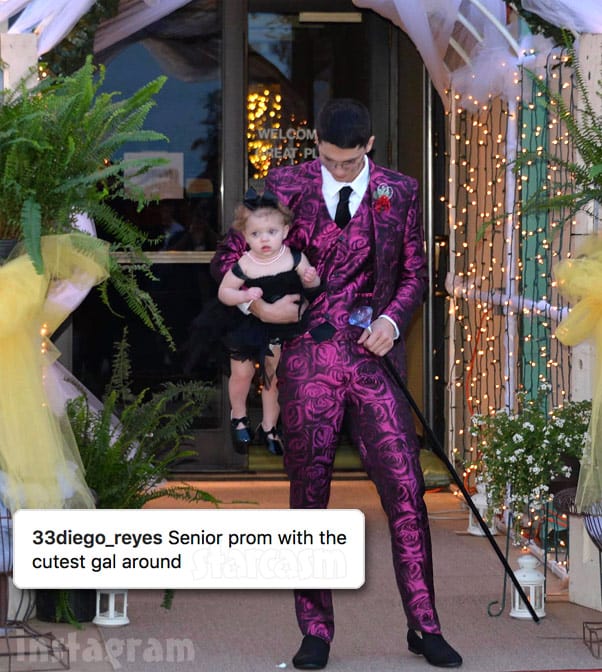 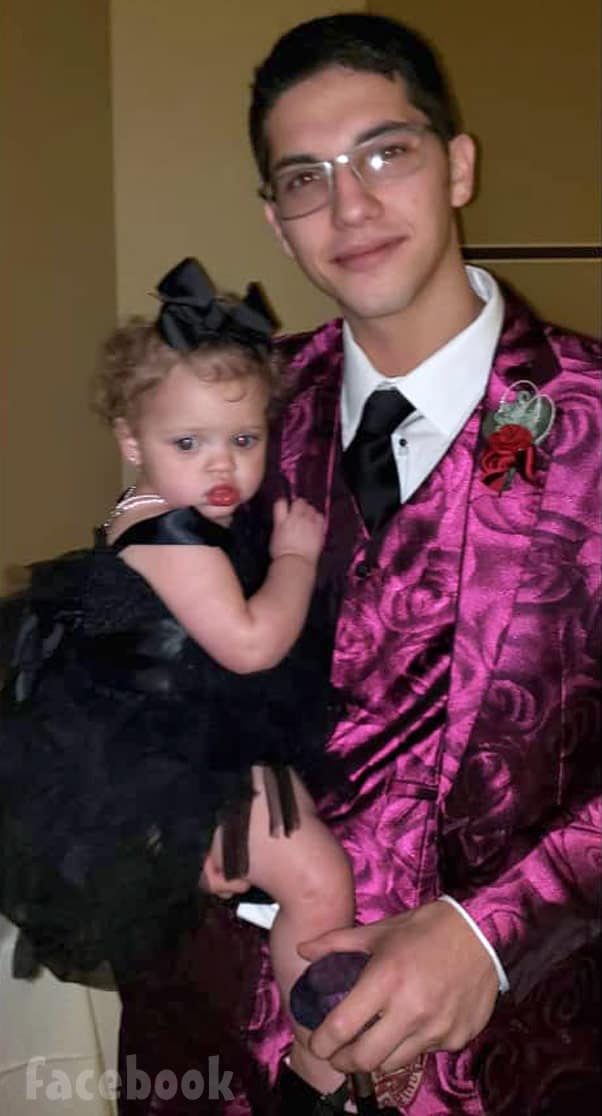 I know Diego did not come across well on the show, and he has his fair share of detractors, but I hope that even they would be forced to admit these pictures of him and his prom date Beckett are joyfully fantastic!

Here is some more of just Aria Beckett, along with a message from her mom Emiley:

The person who keeps me going. I can’t fail with those little eyes watching. Some days may be harder than others but those little grins & giggles keep me going. I hope you realize one day everything I did was for you. Giving up on my dreams to make sure yours are all reached. I wouldn’t trade it for the world. My pride and joy, my everything, my beautiful daughter?

Prior to the big dance, Emiley shared a video updating fans on pretty much everything going on in her life — including her relationship with Diego, her college plans, and whether or not she is dating anyone new. Emiley also gives Diego a run for his money in the “lookin’ damn good in a floral print” department!

Here’s the video followed by some recap highlights:

In the beginning of the clip, Emiley reminds us all that she currently lives in Oklahoma as she reveals that there is a storm outside and she is under a tornado warning while recording the video. She then does some Paparazzi jewelry hustling before getting on with the fan Q&A session.

ON TEEN PREGNANCY AND BECOMING A MOM

Do I recommend teen pregnancy? No, guys. Do what you want to do in life. Finish college, finish school, be financially stable, have a house, be married before you have a kid. I actually have a whole video on this, so I’ll link it down below. But definitely finish school, be married with somebody you know you’re gonna be with long-term, be financially stable before you bring a kid into this world because kids are really expensive.

So no, I do not recommend teen pregnancy at all.

One thing that surprised me about being a mom? I think this is all moms, just nobody wants to admit it. It’s not, like, how do I say this? It’s way harder than you expect it to be. Like, when you’re pregnant with your first kid, nobody’s ready for a kid! It is way harder than I ever expected it to be. I love my kid, don’t get me wrong. I love Aria. She’s my world. It’s just, it’s way harder than I thought it was gonna be.

Another thing that surprised me about being a mom? OK guys, everybody tells you how much you’re gonna love your kids. Like, they say it’s gonna be the best love ever, that you’ve ever felt, and it is the most, like, I love my kids so much. I didn’t realize how much you could love a person. I would do anything for Aria. Shoot, anything! I didn’t realize how much you could love somebody until I had Aria. She is my world. Just that first glance, you’re already so much in love. I just, I can’t even describe it. It’s an unconditional love.

So, that’s one thing that surprised me about being a mom. I knew I was gonna love my kid, but I didn’t realize how grand this love was going to be.

What stage of Aria’s age have I enjoyed in the most? Honestly, I feel like I say this every time, right now is my favorite stage! She is walking everywhere. She has a little attitude. She’ll say, “No, no, no!” and like point her little finger…So, right now is my favorite stage because she’s writing everywhere, walking everywhere. Her little personality is really coming alive, and man has she got some attitude! She’s gonna be a smart booty. (I’m not gonna cuss on you.) She’s gonna be a little girl definitely with some sass. I am in trouble!

Do I co-sleep? Yes. I have co-slept since Aria was about three months. She first slept in this little Boppy thing — it wasn’t the actual Boppy pillow, it was like a Boppy bed, if that makes any sense. I’ll link it down below because I’m not really sure what to call it. But, once she was able to roll over, I actually just put her in bed with me and she slept so much better with me. And I love the cuddles — you can’t beat cuddles! 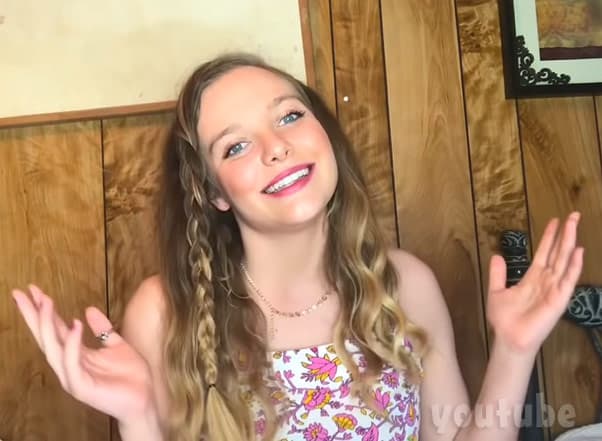 Am I on good terms with Diego? Back story if you’re new here: Diego is my daughter’s father. We are on great terms now! It used to be kind of rough, kind of patchy there, but we’re on really good terms right now, and I hope to keep it that way.

Am I talking to anybody? Yes, I am talking to somebody guys. I’m not gonna say who, just because I’m not ready to say who yet. 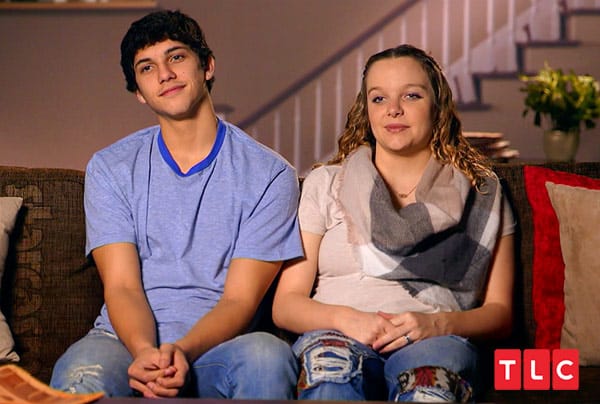 Do I have tattoos? No. I do not plan on getting tattoos either. I’ve mentioned a couple times that I might want a small one behind my ear, but at the end of the day, tattoos just really aren’t my thing. I’m not gonna judge you if you have one, they’re just not attractive to me, and I really just don’t like them.

Am I moving? So, I won’t be moving for a couple years. Right now, I live in Oklahoma. It’s about 15 minutes, 20 minutes from Texas; about 45 minutes from a town called Wichita Falls. It’s a big town. I’ll be working at a hospital, of course, and there’s a hospital there — there’s, like, two hospitals — [they] have a really great school. So I’ll probably end up in Wichita Falls. It’s about 45 minutes from where I am now, so I’ll be close to my family still.

I’ll probably move down there, get an apartment down there. That is my plan as of right now. But, honestly, that could change. That is just up in the air. That’s like two to three years from now. It’s not “right now I’m gonna do it,” it’s just what I plan on doing. I don’t know if it’s gonna happen, I’m just gonna go with the flow and see where life takes me.

It is SO great to hear that Emiley and Diego are on much better terms now! It’s also great to watch Emiley’s videos because she seems fantastic, am I right? Upbeat, colorful, energetic, and really positive!

We previously reported that Emiley and Diego would not be returning for another season of Unexpected. Emiley had stated that she wanted to come back, but others involved did not. It is assumed that at least one of the “others” was Diego, who did not come across well on the show and was probably not very eager to return for another round. With things seeming to be much better between him and Emiley, perhaps Diego would be willing to reconsider? Perhaps he already has? Unfortunately, that was not one of the questions that Emiley answered in the video. Perhaps some one will pose the question next time! ***HINT HINT***

I will send you off with some photos from Emiley’s first birthday party from February:

Happy birthday to my beautiful daughter, partner in crime, side kick, best friend. One year. The best year of my life. I don’t even know what to say bc I’m in tears! But please stop growing up my little independent spunky attitude lady❤️

She’s a wild one?