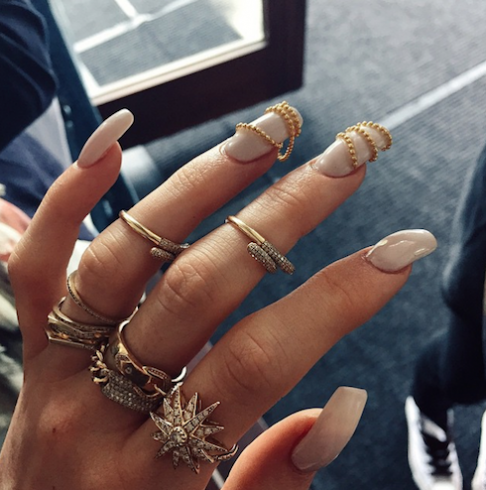 It’s Kylie Jenner Update #2 for the day–the girl’s got too much going on for one article.

Kylie Jenner and Tyga are two goofy, mixed-up lovebirds these days. 25-year-old Tyga’s got a new single, “Pleazer,” that’s all about the wonderful “felony” sex he can’t stop having with seventeen-year-old Kylie. Kylie’s forthcoming KUWTK reality spinoff, The Kylie Chronicles, will detail her Calabasan adventures with Tyga. And they’re planning to elope for Kylie Jenner’s 18th birthday, but they want to make sure the engagement rings are just right before then bolting in the dead of night for Las Vegas (or the nearest over-the-border chapel).

Now, Tyga wants Kylie to get her own tattoo–of his name, around her ring finger. He’s not about standard wedding rings where Kylie Jenner is concerned; for Tyga, it’s all about marking his territory.

“Tyga adores Kylie and he wants her completely to himself,” says a mysterious insider. “He wants her badly and does want to marry her once she turns 18. They’ve even been discussed the perfect, most sentimental and authentic engagement ring.”

And, according to this insider, “Tyga wants Kylie to tattoo ‘TYGA’ around her [ring] finger. Where he comes from, that’s the ultimate sign of love and commitment. He’s already shown Kylie that he’s ready and that he’s down for her with his tattoo of her name. Now, he wants her to do the same.”

Kylie Jenner is nothing if not somewhat impulsive, so it’s possible that she’s got her tattoo artist already booked for the weekend. Big sister Khloe Kardashian, though–who has a tattoo of ex-husband Lamar Odom’s name on her body–has advised Kylie to make absolutely sure that it’s what she wants to do. Khloe and Lamar married after one month of courtship, and divorced just over four years later.