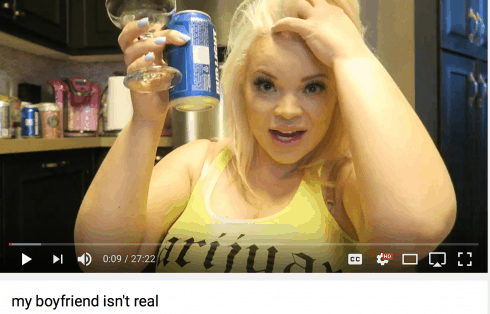 Trisha Paytas makes a living on YouTube via mukbangs of delicious foods, titillating story times about her past and present hookups and personal drama, sponsored try-ons, surprisingly catchy and well-produced pop songs, and her infamous “crying and/or drunk on the kitchen floor videos.” Her online persona appears to be a ramped up version of her real self. Part of what she’s doing is kind of hamming up to get maximum attention and reactions, but most of what she goes through seems to be patricianly real, just enhanced. Kind of like her surgically altered body. In the latest installment of a “kitchen floor” video Trisha drinks Bud Light out of a vintage champagne glass and laments the foils of falling in love with fictional characters. While she’s amping up the “train wreck” factor, as always, she’s also presenting something that’s relatable to many people.

The first part of the vid is a rather lengthy half singing/half talking Marilyn Monroe impression before she settles in for what she says is a “serious video, you guys.”

“This might sound so stupid but, I tweeted about this the other night and a lot of you guys responded actually, and it’s about fictional characters and how so badly you want them to be real,” she goes on.

“Today when I was getting my hair colored I was pretty sure I saw Alfie Allen from Game of Thrones (Theon Greyjoy) at the Montage Beverly Hills hotel. If he’s staying there, don’t go harass him, but I think I saw him there. . . I wanted to go up to him so badly but I didn’t cause I was scared cause Game of Thrones, if you guys didn’t know, has saved my life. I watched it, the first season a little bit but I was on a lot of drugs and I was also escorting . . . so I don’t remember much of it and I remember not liking it.”

She says she recently got back into it because she wanted to see Khalessi’s braids for fashion inspraiton. There’s a pause at this point because she says thinks someone is standing in her mirror (another Trisha trope is paranoia about intruders, ghosts and vampires.) “Anyway,” she says getting straight back into her story. “I really resonated with the show on a deep level and it became this world that became my real world to be honest. I don’t ever have anything to talk about with anything. People wanna hang out and I don’t want to because I don’t have anything to say in this century to this people. I belong in Westerns.”

She cracks open another beer before she tells us that she’s distraught because she feels like her boyfriend is Daario Naharis, which is sad because he’s not real and lives in a fictional world. That’s really the main point of the video, the rest involves random singing, Marilyn impressions and paranoia about a man staring at her from her mirror. If this was 100% real and not partial acting, it would appear as if Trisha were suffering from delusions of some kind. This has kind of been her schtick for a long time, so it seems a bit too calculated to be anything more than a self-produced reality show about her “unhinged” side. Trisha is making an art out of cringe.

What does seem to be real is her obsession with Game of Thrones. One of her best mukbangs to date was of her dress as Khaleesi eating a cake that looked like a horse heart.

Here’s the only Game of Thrones finale spoiler that matters

How 15th century Wars of the Roses inspired Game of Thrones