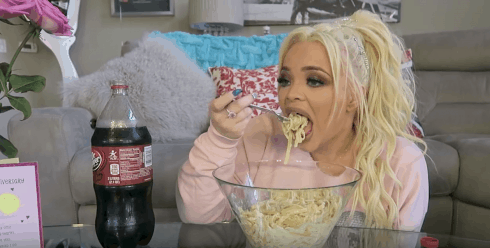 Trisha Paytas revealed on a YouNow livestream with The Vegan Cheetah that she used to be a feeder on YouTube. Trish says people in Dubai have given her up to $10,000 to eat a bucket of KFC chicken. Now, however, the popular mukbanger says she just eats on camera for YouTube views and is no longer paid directly. She does reveal that other YouTube stars have also been offered money to eat on camera, and some rising mukbang stars may be doing similar things.

“This is some exclusive tea,” she revealed to the Vegan drama YouTuber. “When I first started mukbangs people would pay me – but now I don’t really accept cash.

She said she would get paid to eat massive amounts of food on camera, and even offers to fly out to other countries to eat food you can’t eat in the U.S. “I’ve gotten offered money to go to Dubai to go there and eat dogs and rats,” she aid. 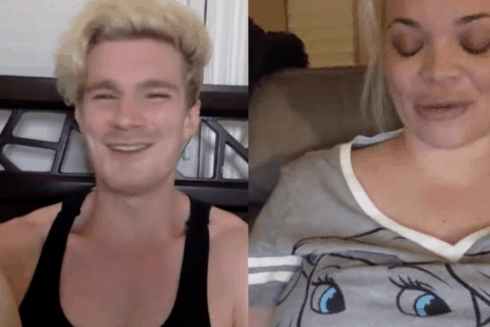 Although she says it’s been a year since she’s gotten paid this way, she still continues to do eating shows because people like it. What she was doing before was for feedee/feeder fetish purposes, but people like to watch mukbangs for many different reasons. People like to watch people eat food they don’t want to eat for diet or financial reasons, and also like the talking aspect of mukbangs. A great many people watch mukbangs while they eat so it doesn’t feel like they’re eating alone, or listen to them as background noise while they do other things.

Trisha says notices that her views go up when she gains weight because she thinks that makes her come off as more relatable to her audience. She recently had liposuction, but immediately gained some of the weight back because she continued to do mukbangs and did not stick to her after-surgery diet. She also says she plays into people who like to watch her eat and gain weight by claiming she’s gained weight when she hasn’t.

Even though she no longer purposefully gains weight or gets paid to eat specific things, she still has to work out on an elliptical for hours some days in order to make up for all the calories she eats for her shows. In a past lifestream with the Vegan Cheetah, Trisha revealed she sometimes doesn’t eat all day if she isn’t filming to try to balance out her calorie intake.

Her relationship with food and sex isn’t just tied to her public persona, but also bleeds into her personal life.“Everyone boyfriend I’ve had in my life are feeders,” she says. “And they were really fit guys.”

Trisha Paytas also speculated that another YouTuber, a former vegan who recently rose to YouTube fame with high calorie mukbangs and is gaining weight at a fast pace, may be getting money to eat similar to her former arrangements. She says she thinks this because of her own experience in this world and because she knows that many YouTube vegans, including someone who “used to be the biggest vegan on YouTube,” are offered money to stop being vegan. 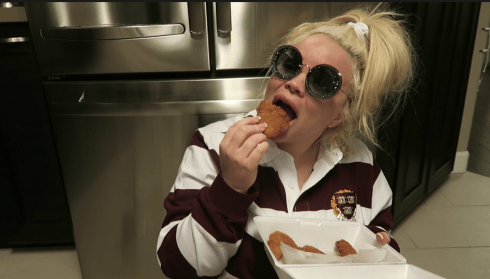 Snooki tells the story of how chugging SoCo and vodka helped her land Jersey Shore gig ?