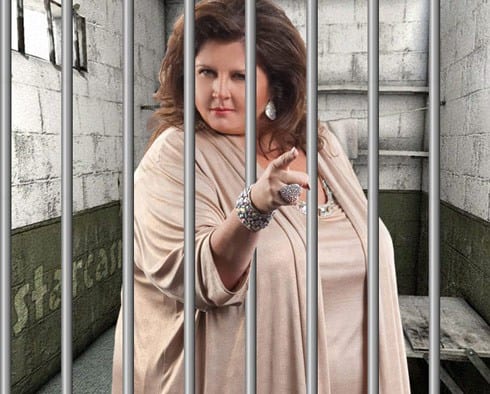 Abby Lee Miller is the latest reality star to take a television hiatus for a stay in the clink. She surrendered yesterday to serve 366 days for bankruptcy fraud. In the weeks prior to her incarceration, Abby Lee Miller maintained that she just trusted the wrong people and didn’t look into what was going on with her own business.

“I’m just a nice Catholic girl from Pittsburgh . . . I know that I am not a criminal mastermind. I listened to the wrong people. I trusted people,” she told Extra. I just never had to take care of the money, so I didn’t. I put someone else in charge of that, and that was wrong. I was so worried about the dancing and worried about these kids that aren’t my own kids and making them winners that I didn’t worry about my own win in business.”

This March she announced her resignation from the popular Lifetime show Dance Moms on Instagram. “I JUST HAVE A PROBLEM WITH BEING MANIPULATED, DISRESPECTED, AND USED,” she wrote in her lengthy caption. “DAY IN AND DAY OUT BY MEN WHO NEVER TOOK A DANCE LESSON IN THEIR LIVES AND TREAT WOMEN LIKE DIRT!”

Miller has expressed several things she’s anxious about, like being physically abused or raped, but she is looking forward on some time to focus on herself.

“I’ll just have me to concentrate on and that’s different,” she explained to ET. “I’ve always put everybody else’s child first before my own health, before my own outfit, before my own time frame. Everybody else was dressed and out the door and looking perfect and I was running around trying to find a clean towel to take a shower with, so I think this will be a little ‘me’ time.”

The dance instructor has been preparing for her stay by meeting with a prison consolation for the past two months, according to TMZ. Some of the tips she may have received involved how to get some of the best jobs in prison and to stay tight with starstruck fans who may help protect her from potential trouble.

The show will still go on for now with Dance Moms, the show premieres Tuesday, Aug. 1 at 9 p.m. ET on Lifetime, and the cameras where with her yesterday when she showed up for her first day in prison. This wasn’t something Miller could control, she says she had to film her surrender because she’s signed a contract with the production company.