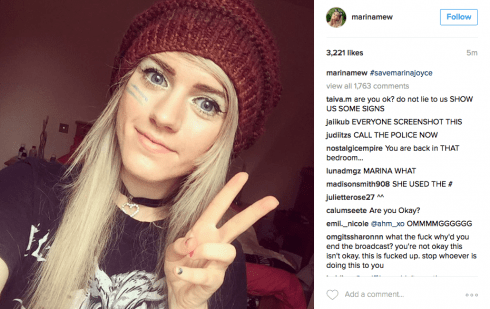 YouTuber Marina Joyce, who made a name for herself on YouTube and YouNow over the past several years with her beauty and lifestyle vlogs, became a worldwide trending topic last night as worries about her increasingly strange behavior reached a fever pitch.

Her fans noticed a change in the YouTube star several months ago. She’s been skillfully uploading her videos for years, and used to have a very confident and relaxed demeanor. Seemingly overnight, however, her YouTube personality and editing skills completely changed. It wasn’t a gradual shift, but a jarring contrast after her Boyfriend Tag video where she presents in her normal demeanor.

The videos after The Boyfriend Tag show a different Marina, who seems less sure of herself. She often repeats herself, looks off camera, and seems stiff. The editing in her videos also changed dramatically, like the Prom Makeup Tutorial, which has a surreal feel because the cuts defy any logical timeline.

The latest video, uploaded last Friday, is the most troubling. It features Marina awkwardly advertising a few Lolita-style dresses for two different companies. In this video there are visible bruises on her arms and back, and she constantly seems spaced out, and sometimes even terrified. Again, the editing and shot choices are strange and surreal and feel more like an arthouse horror film than a fun vlog meant to sell dresses. There is what sounds like a whisper early in the video (at the 0:13 mark) that many think is Marina saying “help me,” but it’s difficult to make out if that’s really what was said. 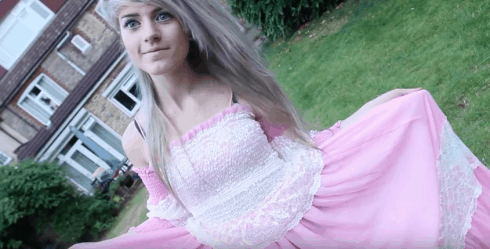 The bruises are also upsetting, and they aren’t the first time she’s shown severe bruising to her audience. A few months ago she briefly tweeted a picture of her arms covered in bruises. Another deleted tweet asked for help because “he’s armed.”

People who were concerned for her safety after Friday’s video started using the hastag #savemarinajoyce hashtag on Twitter, and speculation increased steadily as Marina favorited tweets suggesting she was not okay. Theories included that she was possibly on drugs, experiencing a mental breakdown, experiencing abuse at the hands of a boyfriend or someone else, or that she had been kidnapped and forced to make videos against her will. Conspiracy theorists combed her videos and tweets for signs of kidnapping, while Marina continued to favorite every tweet that mentioned her.

Monday, she responded with this

Then, she tried to invite her fans to meet with her at a sober day rave that takes place on August 3 and begins at 6:30 in the morning. She didn’t explain the even very well, and people got extremely confused by a tweet where she seemed to be asking her fans to meet her in the early morning in East London. Even some of her friends send out tweets warning people not to meet up with her because it might be a trap. In reality, there is a morning party called Morning Gloryville happening at 6:30 a.m. on August 3rd in London. Fans and newcomers to the drama called the police asking on them to check on her, and then did, reporting that Marina was

As the panic over Marina’s safety swelled overnight in the U.S. Marina’s account remained silent until the early morning hours of Wednesday (US time,) when she tweeted

Im TOTALLY fine guys, i am feeling very good today and its actually so heartwarming to see so many people care about me 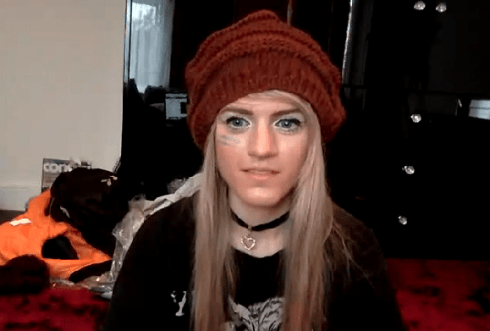 Marina followed up that tweet with a YouNow live session where she confirmed that she met with police. During the life chat she received a phone call from a crying friend wanting to know if she was okay. Marina insisted multiple times that she was fine, isn’t on drugs, and has been acting perfectly normal in her videos. She said any change from her personality has just been from growing up. She did mention her bruises, and said “something happened,” but she couldn’t reveal details because the story was too sad. 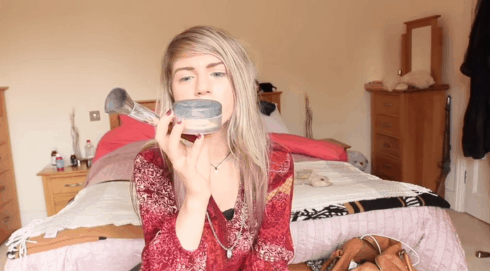 She explained that the “help me” whisper in the video was her mom, and that the gun that can be seen in some shots of her videos belongs to either her mom or her brother, and is just a BB gun. It appears that Marina has not been kidnapped. She has definitely been checked on by the police, and she has invited her fans to meet and party with her at a morning sober party or a free Youtube meetup event on August 6th she’s organized with fellow Youtube creators. Whatever the circumstances behind her drama may be, Marina Joyce became a worldwide trending topic overnight inspiring widespread concern over her personal wellbeing.