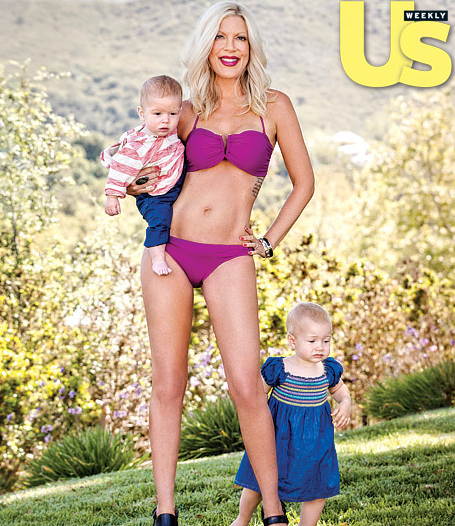 Tori Spelling appears to be taking a no-bullshit route as she promotes her latest book. She’s been candid about money troubles, and in her new memoir Spelling It Like It Is, she admits that she lied about how she lost 45 pounds of baby weight so quickly.

It’s commonly known that celebrity mothers make their post-baby weight loss seem easier and healthier than it actually is, but they rarely speak openly about it. Tori’s blowing that out of the water. In April Tori told US Weekly that she shed weight she gained during her traumatic pregnancy with her fourth child Finn (she had a severe form of placenta previa,) plus 15 pounds of extra weight she’s put on over the years with light cardio, and a sensible and healthy diet with limited carbs and lots of vegetables. She also said she eliminated wine. “I feel like I took off the weight safely, and I’m totally happy here,” she said at the time. “There’s no magic pill, but I have never once counted calories. I’m a big believer in eating healthy.” She credited swimming as being her exercise of choice.

In her book she admits she hardly ever exercises, and that she shed the pounds simply by not eating. “I really don’t exercise much, period,” she says in the book. “So I took off my weight the old-fashioned way. I like to call it the Just Keep Your F–king Mouth Shut and Eat Air diet. It’s all the rage.”

Why did she lie?

“My publicist had given me clear instructions about what to say about my weight loss. Women didn’t want to know that I had lost weight through dieting, not exercising. I didn’t want to be the a–hole who didn’t work for it. So I said that I swam. It was sort of a bad choice. I can’t do much more than a doggy paddle.”

What do you think of Tori’s revelations?