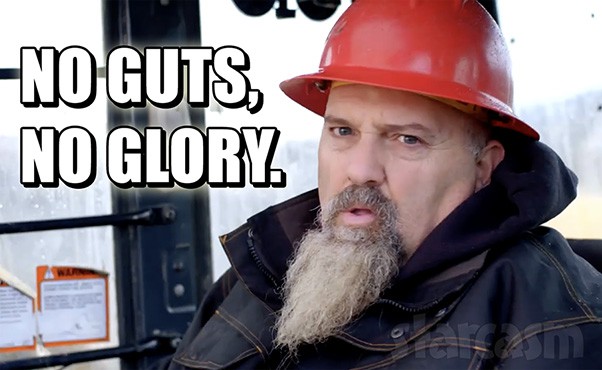 OG Gold Rush miner Todd Hoffman is returning to Discovery for his own spin-off mining series, and he’s bringing his family with him!

On the same day as the Gold Rush Season 12 premiere, Discovery announced that the Hoffmans will be trekking back to Alaska in hopes of turning a struggling gold mine around before winter closes the operation for the year. The show is tentatively title Hoffman Family Gold, and it will premiere in early 2022 — right on the heels of Gold Rush Season 12.

In addition to the press release announcing the show (included below), Discovery also released the cinematic first preview trailer for Hoffman Family Gold:

The clip starts with someone yelling “Fire in the hole!” before we’re then treated to a grungy version of “Amazing Grace.” Todd’s voice then takes the baton.

“Three years ago I walked away from gold mining a beaten man,” Todd says. “Now I’m going back to Alaska. I know it’s a long shot. It’s our last
shot. But you know what? No guts, no glory.”

(LOS ANGELES) – Fans of Discovery’s #1-rated show Gold Rush have watched miner Todd Hoffman bet it all with the hope to strike it rich in gold. Never afraid of a gamble, Todd has set up his mining operations in Alaska, Oregon, Colorado and Guyana, South America. He’s had some success and a fair share of struggles over the years. Now, Todd has been given an opportunity too good to pass up so he’s heading back to Alaska. Will he strike it big? Or walk away penniless? Hoffman Family Gold (w/t), an all-new series, is set to debut early 2022 on Discovery and streaming on discovery+. The series is produced by Lionsgate’s Pilgrim Media Group.

After ending a checkered mining season in Colorado in 2018, Todd is ready to get back in the game. He’s emptying his life savings with the hope to turn around a distressed mine located nearly 100 miles north of Nome, Alaska. An old mining partner has invested in the nearly 2,500 acres of rugged land. However, after years of greenhorn crews, busted equipment and little to no results, they’re about to go belly up. Todd’s taking a big gamble that he can turn around the operation and produce enough gold to get the mine out of the red. If he pulls it off, Todd will secure the mining rights for the next decade and could build a family legacy. But can he do it in just six weeks before the winter season sets in?

Over the years, Todd has built a mining career guided by a strong belief in God and the American dream. In order to make his dream a reality, he’s bringing in his closest family and friends. Joining Todd in Alaska will be his father Jack and his son Hunter along with a veteran crew of gold miners. For Todd, it’s more than just finding gold – this could be Todd’s last chance to set up his family for generations to come and share the wealth with his friends who’ve stuck by his side over the years. This is Todd’s time to prove he has what it takes to hit the ultimate motherlode. There is no room for failure.

Leading up to Hoffman Family Gold (w/t) is an all-new season of Gold Rush, premiering Friday, September 24 at 8 PM ET/PT on Discovery and streaming on discovery+. With the price of gold holding near record highs, each miner is battling to find and mine the best ground. There’s a ground war in the inhospitable wilderness of the Klondike. But one thing is certain, once gold fever strikes, these crews will never give up.

In case you missed it, prior to leaving Gold Rush, Todd started his own production company called Gold Standard Television in 2016. The first project announced for the new production company was a scripted series titled Prodigal. The series was to be the story of “a Manhattan gangster in a darkly-toned Western tale of greed and redemption woven with magical realism set in the 1870s frontier.” Comic book writer Nathan Edmonson was hired to handle writing duties before the project vanished and was never heard from again.

After Todd left Gold Rush behind, he started (or teamed up on) another production company called ZÜM Media. (Yes, that is “ZÜM” with an umlaut.) In late 2018, ZÜM Media announced their first project was to be a new gold mining competition reality series titled Greenhorn Gold. Todd was just about as competent at production as he was at gold mining, and Greenhorn Gold never panned out either. AndBut, just like some of Todd’s mining failures, it wasn’t for a lack of trying.

“I put together what [I] thought was an amazing mining show and met with Netflix. They loved it,” Todd updated his Facebook followers in August of 2019. Unfortunately, all that glitters isn’t gold.

“After several weeks and several more layers they denied the show,” Todd continued. “I prayed and asked God if a return to TV through mining would be good for my family let it get picked up. So far it did not.”

Just to make sure that he was hearing God’s message correctly, Todd continued to push. “We have sent the show to some of the other streaming companies but I wanted to share what’s going on with us.”

Todd wrapped up his update much like many of his mining seasons, by putting a positive spin on negative results. “My family is doing great and maybe doing another show like that would not be good for us as a whole. Not sure if you guys know but there’s a lot of BS that goes into that sort of thing and what you have to put up with. 😉”

What do you think about Todd returning to Discovery for more attempted gold mining? I’m a fan of Gold Rush, and I confess that I an also a fan of watching Todd and his crews. However, this show seems like it might be putting the “rush” in Gold Rush. The press release suggests that Todd and his crew will be taking over a failing mine with just six weeks left in the mining season. A six-week season seems like it wouldn’t be enough to merit its own show? I don’t know. I guess the Hoffmans could manage to mess up quite a bit in six weeks, but still. 😉