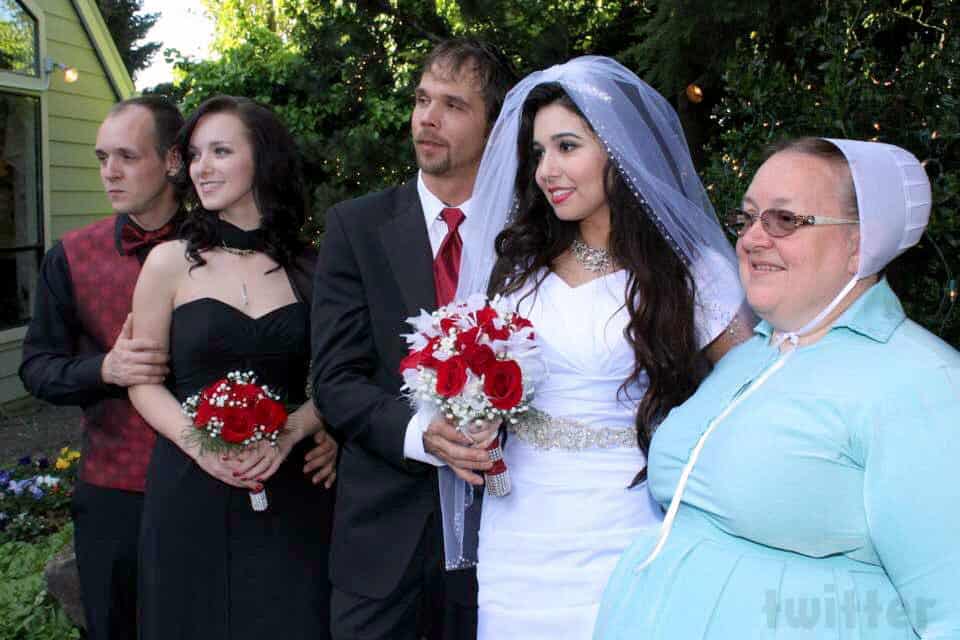 Tonight is the dramatic two-hour season finale of Breaking Amish: Return To Amish in which show bad boy Jeremiah Raber walks down the aisle with his fiancee Carmela Mendez. Aside from one “tweet and delete” picture on Facebook, Jeremiah and Carmela (and TLC) have kept all of their weddings photos locked up in a virtual vault — until now!

Both Jeremiah and Carmela have posted numerous wedding pictures on Facebook over the past week, and we have collected them all for you here in this post. But, before we get to the rest of those, I wanted to share a concerning message posted by Jeremiah:

It saddens me to see the things people have to say about the preview of me and my wife getting married. I can’t believe that so many people are so rude. We are happily married but yet people want to say she did it for the money or to get a green card or for the publicity. Well for your info I had to beg her to have it filmed because she hates to be in the public 2nd she’s not illegally here. She was born here, we got married because of true love. We are happy together but it seems like people don’t want that for us. ? sad thing is she sees all the comments.

P.s if you want to see how rude people are then look up the official breaking amish page and read comments under the post about our marriage

I haven’t checked the official Return To Amish Facebook page recently, but I can say that all of the Facebook fan pages that I have read over the past few months (which is too many, I’m a bit embarrassed to say) have had 95% extremely positive things to say about Carmela — even those that REALLY do not like Jeremiah. To suggest that she married Jeremiah for money is utterly ridiculous, and the whole green card thing is a bizarre, fictional narrative that I have to assume stems from Carmela being from Vancouver, Washington? (With people thinking it’s Vancouver, British Columbia?)

Anyways, here are lots of Carmela and Jeremiah Raber wedding photos, including some with Jeremiah’s co-star Abe Schmucker. (To see more behind-the-scenes photos of Abe, Rebecca, and Mama Mary in Vancouver for the shindig, click here!)

Is there a Kimye prenup?