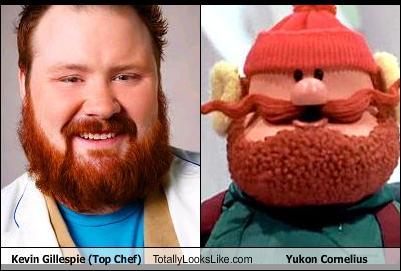 Kevin Gillespie, everyone’s favorite pork-lovin’ leprechaun, lost Top Chef Season 6 to Evil Robot Michael, and I’ve been inconsolable ever since. Now the lovable Yukon Cornelius lookalike has revealed that a personal issue that may have affected his performance during the final round.

Gillespie was a standout favorite in a Top Chef season devoid of much drama, bed-swapping, Carla’s Hair or any really compelling villains or zany characters. As a Georgia boy who turned down a scholarship to MIT to pursue a cooking career, Gillespie cooks simple, tasty food that impressed the judges so consistently he won the most elimination challenges this season, including the vegetarian challenge. His specialty is a high-minded kind of comfort food, he likes sustainable cooking practices as much as he likes bacon. Going into the final, he had a promising chance up against the Robot Brothers, who are veritable cooking machines, but seem to lack the heart Gillespie can put in his dishes.

Although Kevin Gillespie started off strong with fried chicken skin over a squash puree, everything else in the final meal kind of flopped, including his favorite food, pork belly, and he was the first to be cut. So many of his fans were disappointed and perplexed: after such a strong season, why did Kevin fall on his face in the final round?

Kevin recently revealed to USA Today (via PopEater) that he was going through a divorce with wife Callie during the filming of the last two episodes. He told the USA Today blog Pop Candy:

“And all of this was going on during ‘Top Chef,’ which kind of puts some context around why, in the final two episodes, I seemed out of it. It was kind of at the lowest point for us, you know?”

Awww no! It’s so sad to here that he was going through such a difficult time during this competition. Regular life is stressful enough, but  running a restaurant, and leaving the restaurant to compete on Top Chef while undergoing a divorce would be enough to make anyone lose focus and control. Not to mention the fact that his mom was there, that probably didn’t phase the Robot Brothers, but Kevin said at the reunion that it was an emotional strain to have his mother there at the end because he wanted to spend time with her instead of cook.

Kevin doesn’t blame Top Chef for putting undue stress on his marriage, but he does call it “the straw that broke the camel’s back,” telling TVGuide that the show contributed to the divorce:

“Only in the sense that the show gave Callie an opportunity, because of my time away, to have a little bit of clarity. It’s a terrible situation because she and I love each other very much, but we’ve decided it’s not fair to continue to be married because it’s just not right. I didn’t want people to think it was the celebrity.”

It’s okay Kevin, even though you didn’t win the top prize, you’re still a winner in our hearts. You’re like the cooking show equivalent of Adam Lambert with A LOT more talent (sorry Lamberteers).

If you’re ever in the Atlanta area, drop by the Woodfire Grill, where Gillespie is the co-owner and executive chef.

View a picture of Kevin and his ex Callie during happier times here.