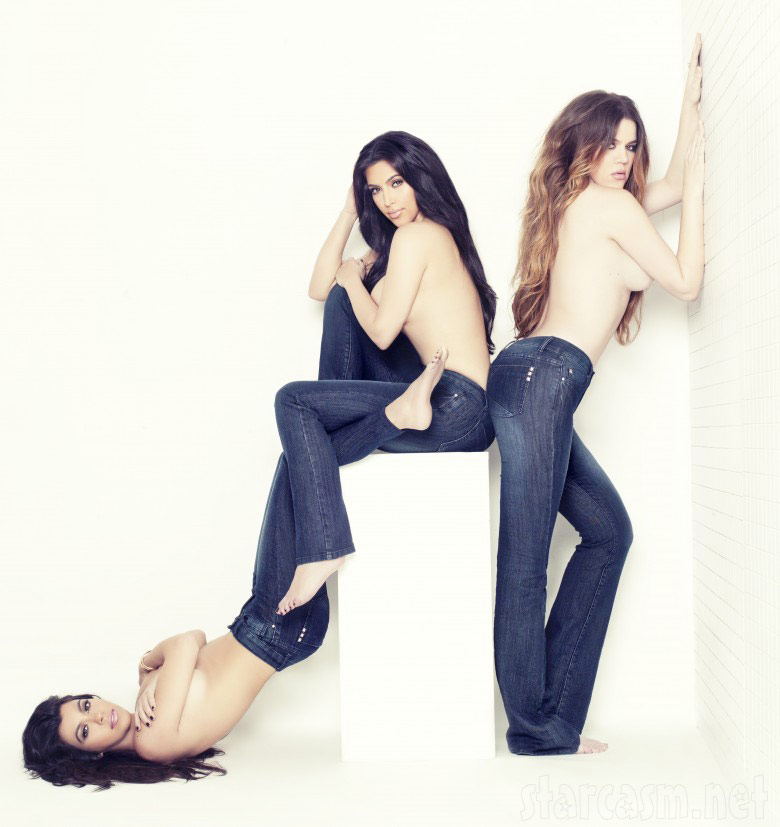 Once again proving they know everything there is to know about selling themselves, Kardashian sisters Kourtney, Khloe, and Kim went topless to promote a new line of jeans for their Kardashian Kollection label. In the photo Kim Kardashian appropriately sits on a sculpture stand (and I mean that as a compliment) while Khloe Kardashian paws at a tile wall and a very thin Kourtney Kardashian dangles upside down – all of them managing to cover their naughty bits with clever arm positioning. (Click image to enlarge)

It surprises me that Khloe is included in the photo given all the recent controversy surrounding her jeans. What’s that? Oh, my bad. GENES.

The topless Three Glamigas photo comes after an initial batch of promotional images surfaced last week featuring the siblings in their KK jeans with shirts. Here’s the picture of Kim Kardashian – take a look at it and see if you don’t find yourself asking the same questions I did: 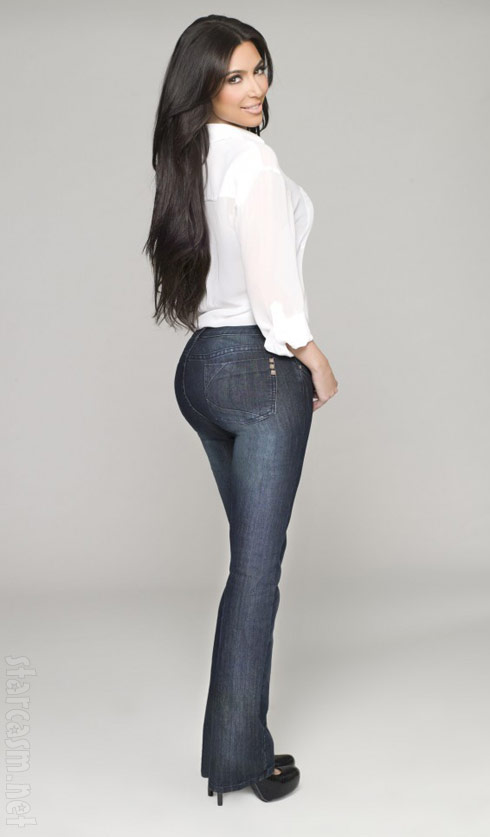 Anyone else see the problem here? If we are to believe Kim is actually wearing a pair of Kardashian Kollection jeans in the photo above, then it means there are only four or five other uber badonkadonk endowed women on the planet that they would fit! And if those jeans have been altered, then it’s some sort of false advertising is it not?

All serious issues aside, I literally cannot believe that ass. Seriously. I don’t believe it. If that photo had a leprechaun in it I would consider that to be much less magical and more likely to be real. (Cue: Lucky Charms mascot pointing at Kim’s booty, “It’s magically delicious!”) And gold? P’shaw! I know what I want to find at the end of the rainbow!

If your town still has a Sears and you’re popping in to pick up a replacement washer or dryer or maybe an electric screwdriver, be sure to hop on the escalator (yes, there is another floor) and check out the Kardashian Kollection! If you don’t have a brick and mortar Sears near you, you can click over to Sears.com and check out the duds. It appears that the jeans are currently on sale for $46.99 through February 4!

Let’s take one long last look at Kim putting the stretchability of denim to the ultimate test shall we?

North West baptized in Jerusalem — get the details