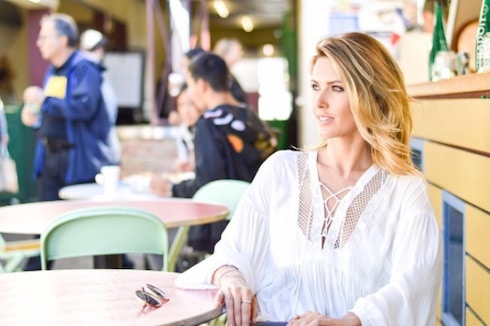 Audrina Patridge married her longtime beau Corey Bohan over the weekend at a romantic, bohemian beachside wedding in Hawaii. The early stages of their love story was documented on the hit MTV reality TV series The Hills, and now Audrina has joined the wifey ranks of her former costars Lauren Conrad, Kristin Cavallari, Whitney Port—and of course Heidi Montag.

Audrina, 31, wore a fitted lace fit-and-flare wedding gown from bridal designer Pallas Couture, Us Weekly reported. The front of her dress featured a deep sweetheart neckline with delicate straps in the front and deep V open back, with a long tulle train. She paired her dress with a pair of nude sandals and kept her make up minimal with a soft smoky eye, a nude lip. Her long hair was styled in loose beachy waves pulled back on one side and fastened with a large red flower.

Her BMX biker and surfer hubby was a little more casual in his attire, which fit their island wedding theme. He paired crisp khaki pants with black suspenders and a white button down collared shirt. The 34-year-old Aussie finished his beach wedding look by tying his long dirty blond hair in a messy man bun.

Audrina Patridge and Corey Bohan are hitched! Take a peek inside their big day at eonline.com! ❤️ (?: Splash News)

The couple’s 4-month-old daughter also made a cameo while her parents tied the knot in front of 100 guests. Little Kirra looked cute as can be in a white dress and and a big white bow headband during the November 5 ceremony.

“Our wedding was magical,” Audrina told Us Weekly. “We had all of our friends and family in one place to celebrate!”

The early stages of Audrina and Corey’s relationship played out during The Hills after she stopped pursuing her former flame, Justin Bobby, People reported. Audrina and Corey finally tied the knot after spending eight years together. Corey popped the question last November, they announced their pregnancy last December and they welcomed their first daughter together, baby Kirra, in June.

Just how fake was “The Hills?”

What are The Hills’ Spencer Pratt and Heidi Montag doing now?

Heidi Montag says her friendship with Lauren Conrad was F-A-K-E: ‘I spent years pretending to like her’