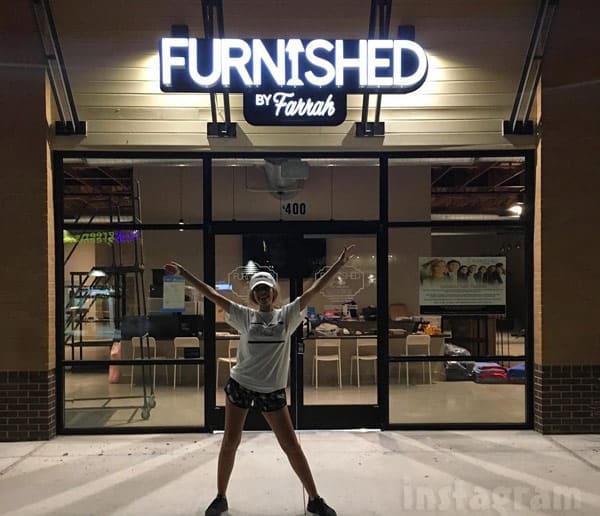 Teen Mom OG star Farrah Abraham is really embracing the title of Teen Momtrepreneur as she will have opened no fewer than three completely different brick and mortar businesses in the Austin, Texas suburb of Lakeway in 2016 alone. First was her Froco frozen yogurt restaurant, which seems to still be doing well after the Grand Opening back in early June. Next up was her Furnished By Farrah furniture store and staging company, which had a soft opening earlier this year but will officially open alongside Farrah and her daughter’s Sophia Laurent Children’s Boutique later this month.

Last month I had a friend (and fellow Teen Mom fan) visiting from out of town, and of course one of the places she most wanted to visit was Farrah’s frozen yogurt shop. So, we make the short trip out to Lakeway for some Froco froyo, intending to pop into Farrah’s furniture store afterward. Imagine our surprise to find Farrah Abraham (hardly recognizable at the time with her then-new blonde hair) hard at work on her laptop at one of the tables. Sophia was also there enjoying a cup of frozen yogurt.

Farrah was courteous enough to talk with us, and she even remembered quite a bit about me from when we first met at the Froco Grand Opening in June. After Farrah and Sophia left, we enjoyed some very tasty frozen yogurt before heading over to Furnished By Farrah. 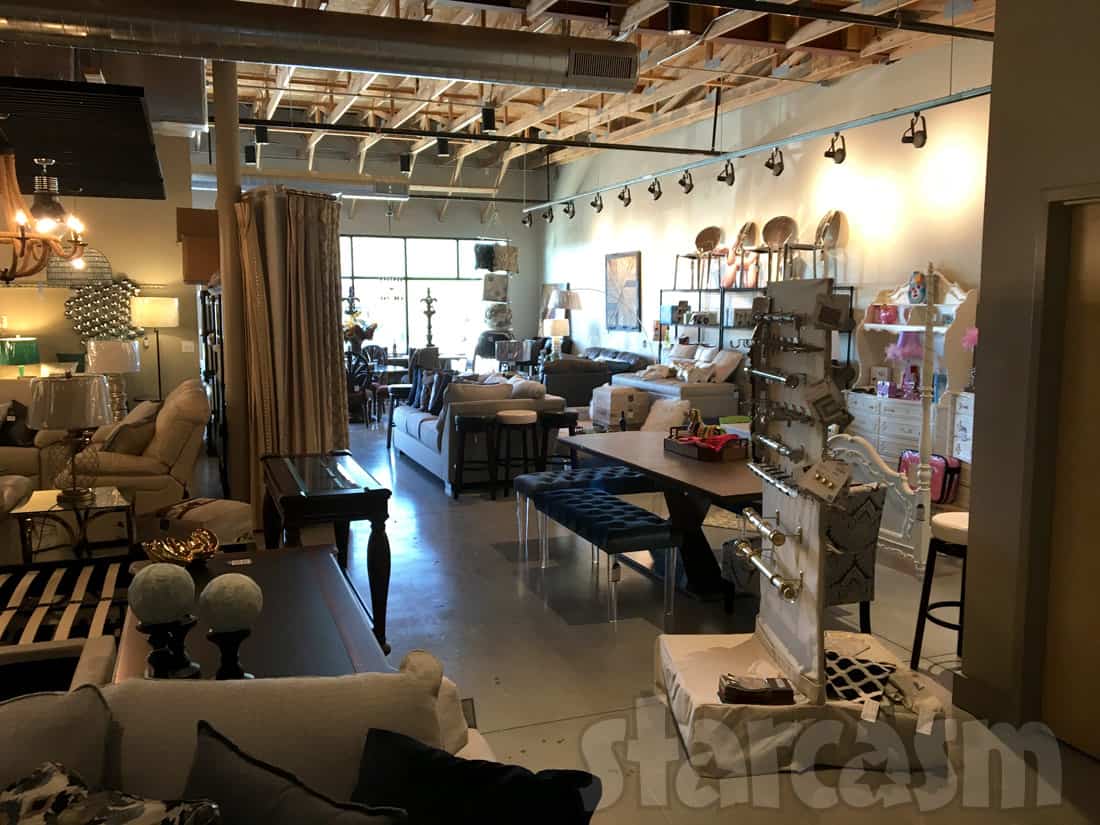 I have to confess that I had very low expectations heading in. I’m like most everyone on the internet in that it seemed to me that Farrah was overextending herself with all of these different business ventures — any one of which would have seemingly been a full-time job requiring a lot of training and education on that particular market and industry. But, perhaps due in part to her significant other Simon Saran having lots of experience and connections in the furniture business, Farrah’s store seemed very well organized with a well-curated selection of furniture as well as smaller accessories.

First off, I should mention that we were greeted by a very professional young man who introduced himself and the store before allowing us to look around on our own. Any time we had questions, he was quick to respond with well-informed answers. I seriously doubt we will see him getting “severanced” by Farrah in an upcoming episode!

My friend from out of town was smitten with a rather large and unique outdoor daybed made by MAjorca. It was a bit pricey (somewhere in the $3,000) range, but I have to say it was pretty cool, and seemed to be very high quality. I couldn’t find a listing on the Furnished By Farrah website, probably because it is an in-store-only item, but here is a stock photo: 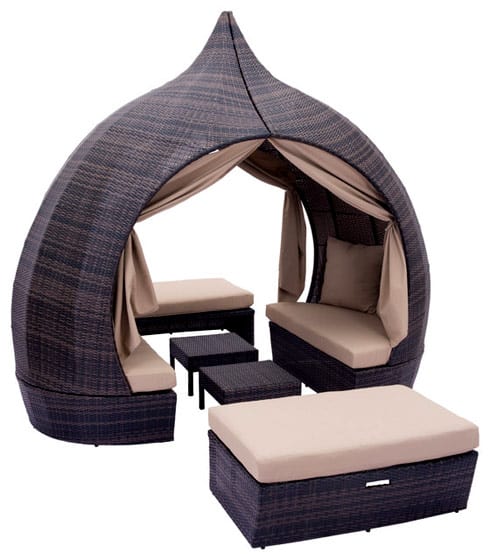 The inside of the store is relatively small for a furniture store, so things were a bit tight. (You can see a sample photo a few paragraphs up.)

As I mentioned above, the selection was quite varied, but consistent. Most everything was just a bit edgy, or perhaps over the line of being downright edgy, albeit almost always with a sense of fun.

Although I liked the furniture selections, I was most surprised by the selection of really creative and fun accessories! For instance, there were these ceramic balloon animals that came in both pink and blue: 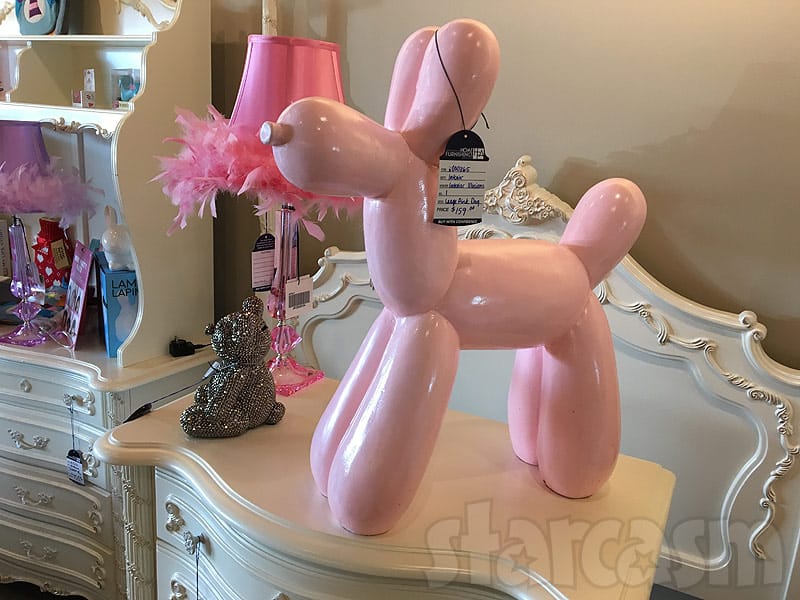 Jeff Koons would be proud! 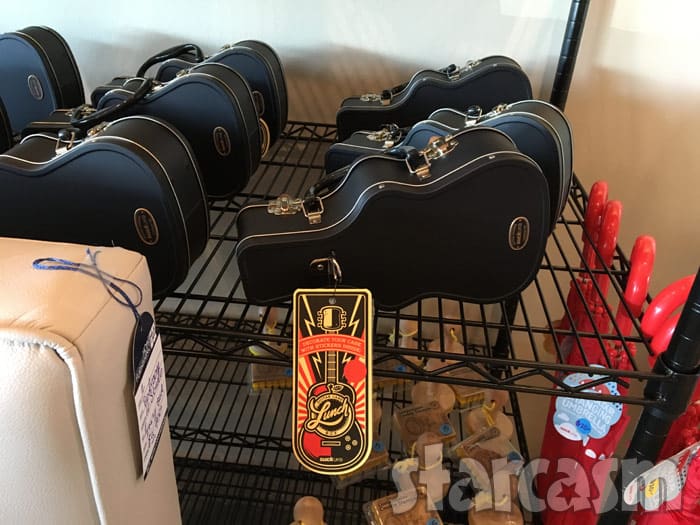 And although I would never, ever actually buy it, I have to confess this Scarface lamp with a metallic gold machine gun base made me crack a smile:

After making out way around the store, we found ourselves once again at the front counter where we were pleasantly surprised to find a selection of Mom & Me products available! We were offered a sampling of their “Sexy Red Blend” wine (which I had already tried thanks to Debra being kind enough to sell me a bottle at the Froco opening) as well as some Mediterranean Mushrooms and their “Best Damn Mustard.”

[I feel I should mention that I am uncertain if the free samples we were offered is a normal thing or not. The workers there were still in soft opening mode and it may have just been a limited time thing, so please don’t be upset if they no longer offer the samples.]

Next up for the Farrahntrepreneur is the Sophia Laurent Children’s Boutique, which is located next door to Furnished By Farrah. The grand opening for the boutique is scheduled for November 20, which is a bit delayed from the originally planned opening on November 12. Initially, Furnished By Farrah was scheduled to have its official grand opening at the same time, but I am unsure if that is still the case. Either way, I am sure they will both be open for the SLCB opening and fashion show!

UPDATE YOUR CALENDARS: NOV 20th 2016 2pm Austin TX at The Oaks of Lakeway. We have selected our adorable models for the runway & are so excited to share this special moment in history with you all! Thank you for supporting @sophialabraham & sharing so much encouragement and love! Big thank you to all of our awesome sponsors @greatkidssnacks @level12salon @mophie @jugojuicery @frocofreshfrozencoba This will be a Grand Opening to remember ???

If you plan on attending, I will most certainly see you there. (Gotta restock on muh mushrooms yo!)