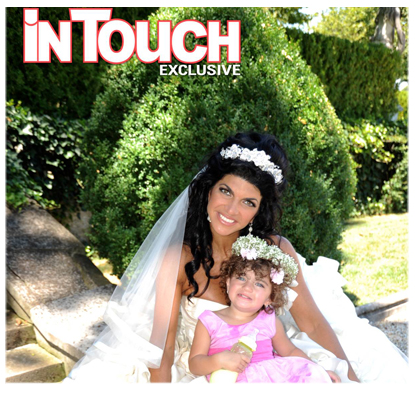 Teresa and Joe Giudice have lived through some really taxing financial and family issues publicly, but instead of everything driving them apart, they’ve stuck together.

In fact, they just had a princess-themed vow renewal ceremony taped for The Real Housewives of New Jersey, and walked down the aisle for a second time at Long Island’s Oheka Castle in a $25,000 Pnina Tornai (which was probably comped, or discounted, but InTouch noted the retail price.) Teresa picked out the gown during a trip to the shop where Say Yes to the Dress is filmed: Kleinfeld Bridal in NYC. She was excited to have a gown that A: “cost a crazy amount of money!” and B: “was something no one else has” (unlike her first gown, which was inspired by Princess Diana’s wedding dress.

The girls were in pink princess bridesmaids dresses, and Kevin Jonas was there! To complete the princess-theme, they had a horse-drawn carriage, and, of course, got re-married in front of their castle-like house.

CLICK HERE to see Teresa and Joe’s first wedding pics from their original wedding in 2000.

Oh Teresa Giudice, call it denial, call it resilience, water rolls off her like off of a Duck’s back.

Apparently throughout all the troubles Teresa has never thought of divorce as an option “We try not to go to bed angry,” she relates. “Not every day is going to be peaches and cream.”