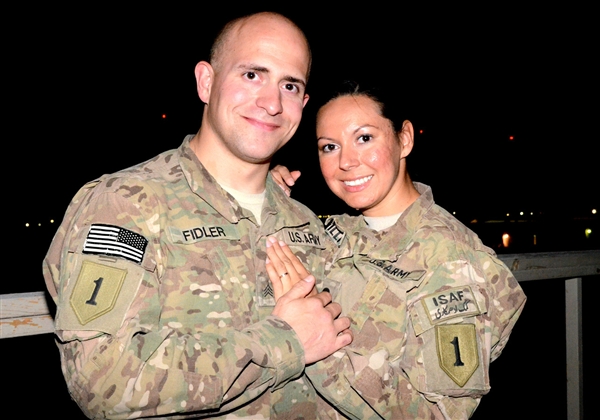 They were both deployed to Afghanistan, but they were so much in love, they wanted to get married right away. Because weddings are not performed by military chaplains in combat zones, they did some Googling and found out about proxy weddings. Marriage by proxy allows one or both to fill out information online, and have a “proxy” stand in for them during a legal marriage ceremony. Their wedding essentially happened without them while they celebrated with their friend on roof of the Joint Operation Center building at the Combined Joint Task Force 1 compound with nonalcoholic beer and a wedding cake a soldier’s wife had made and mailed to them.

Michelle gushed: “Everything clicked. We enjoyed all our time together, there was never a bad moment.”

Drew: “She’s perfect for me. When I’m down, she’s always there for me to pick me back up.”

Why didn’t they want to wait until they got home?

Michelle told the American Forces Press Service: “I think weddings are pretty much for other people. All that really matters is marrying the person you love.”

On The Today Show Drew elaborated: “We knew we wanted to get married as soon as we got back, but we also knew that we weren’t going to be able to have the wedding that we wanted for at least a few years, we’ve been saving for it. It’s gonna be great, but it takes time to save for something like that.”

Why does proxy marriage exist?

This service is being more commonly used by people in the military, but it started in Montana in the 1800s for miners who wanted to marry their long-distance fiances. Drew and Michelle used Reverend Marty Stuehler, a nondenominational pastor who offers proxy marriage packages on his website.

To make this whole story even more romantic, the proxies got engaged live on air! Steve surprised Jamie by proposing to her. Jamie seemed a little embarrassed and surprised, but she did say “Yes,” followed by “That’s just crazy!”

Did Ariana Grande cheat on her ex-boyfriend with Nathan Sykes?