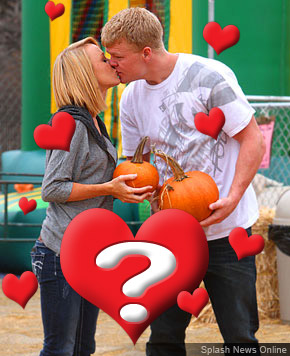 Mature-beyond-her-years Teen Mom Maci Bookout may be back on the trail of true love as she and her former boyfriend Kyle King were spotted in a Los Angeles pumpkin patch Monday looking quite intimate!

A witness tells Us Magazine, “They were having a great time running around the patch.” The witness continues, saying at one point Kyle “came over and kissed her.” (!!!) “It was a cute couple-y thing to do. They were flirting and holding hands. He was really sweet and attentive the whole time.”

This should help quell rumors that Maci is back with baby daddy Ryan Edwards, a story that graced the cover of OK! last week.

There was no explanation as to why Maci and Kyle were in Los Angeles or where Bentley was during the couple’s pumplic displays of affection. The Teen Mom season two reunion special with Dr. Drew airs tonight, but it was filmed some time ago and is usually shot in New york. Perhaps Maci’s 23-month old son Bentley won some sort of “coolest kid on the planet” contest?