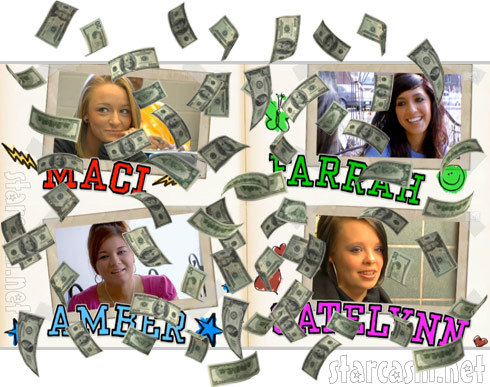 There is little about the lives of MTV’s Teen Moms that we don’t know by now as Farrah Abraham, Amber Portwood, Maci Bookout and Catelynn Lowell have taken over the reality tabloid reigns from Jon and Kate Gosselin. But, there was still the closely guarded secret of how much they were getting paid that everyone was keeping 100% hush-hush about… Until now!

The mystery appears to have been solved if we can trust Gary Shirley’s best friend, Jordan Sanchez, who let the cat out of the bag to Life & Style:

“The Teen Mom stars earn $60,000 to $65,000 per season,” a series insider tells Life & Style. It’s enough to provide on-again, off-again couple Amber Portwood and Gary Shirley with comfortable lives–but neither one seems to be a good saver. “Gary says he’s broke,” Gary’s best friend, Jordan Sanchez, tells Life & Style. “The money is the only reason he’s willing to do the show. You can’t walk away from money like that.”

That may not seem a lot to some folks (The Real Housewives of New Jersey reportedly earn $250k each per season) , but for broke teenagers trying to raise a kid $60k-$65k is a lot of bread (UPDATE, Amber revealed in court that she made $140,000 every six months from Teen Mom!)! Watching the show you would never know that they were getting that kind of money, which makes me wonder if it’s not somehow tied into a college fund or something similar.

MTV knows that giving these girls a lot of cash would instantly ruin the “reality” aspect of documenting their struggles as teen mothers trying to get by, so there has to be some sort of catch right? Plus, I’m not sure how the money is broken up between parents. I know Ryan (Maci’s baby daddy) has mentioned on numerous occasions he only does the show for the money so the guys are obviously getting some of the pie. Is the $60,000 figure for each “family?” And what about Catelynn and Tyler, who gave their daughter up for adoption? Is it fair that they would get paid the same?

GRRRRRR!! I think this article raised more questions than it answered – and that’s assuming it’s accurate!