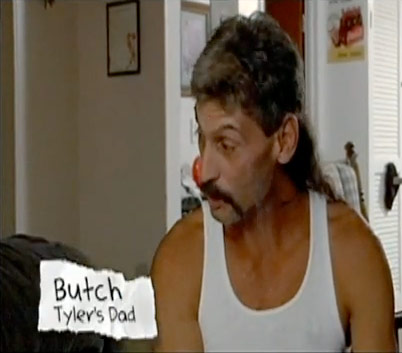 There is so much teen mama drama on MTV’s reality series Teen Mom that is seems impossible someone on the show could distract from it, but that’s exactly what the uber-mulletted father of Tyler and step-father of Catelynn did during last night’s episode “Standing Up!” Butch, the gaunt and mustached character straight from a Jeff Foxworthy joke, got into an altercation with his wife (Catelynn’s mom) and shows up at the home of his ex-wife (Tyler’s mom) with a bloody scratch across his face and looking for a place to crash.

UPDATE – BUTCH ARRESTED ON SEPT 8, 2011 FOR DOMESTIC VIOLENCE AGAINST HIS WIFE APRIL.

Perhaps I should take a moment to clarify the Catelynn and Tyler family situation for those folks that haven’t seen Teen Mom or 16 and Pregnant. Catelynn and Tyler had a child (Carly) and gave the baby up for adoption during MTV’s reality series 16 and Pregnant last year. (Both of these young people handled the situation in an extremely mature manner and really seemed to have their act together through a very tough situation.) Tyler’s real father (Butch) met Catelynn’s mom (April) after Catelynn and Tyler began dating. Butch eventually married Catelynn’s mom. Does that clarify things? Probably not.

Butch was really angry when he found out Tyler and Catelynn were giving their child up for adoption and he never seems to miss an opportunity to try to make them feel bad about it. It’s a pretty stunning trait from a drug addict repeat criminal that left Tyler’s mom and Tyler when his son was just four months old.

Anyway, Butch and April (Catelynn’s mom) moved away forcing Catelynn to find a new place to live, which was with Tyler and his mom. That pretty much sets up last night’s episode in which Butch showed up on the doorstep of Tyler’s mom’s house (where all three are staying) with the bloody scratch looking for a place to crash. So, he crashes at the house and seems to be getting along OK with Tyler when he reveals that he needs to go to court for violating his parole and that he might have to go to jail again. 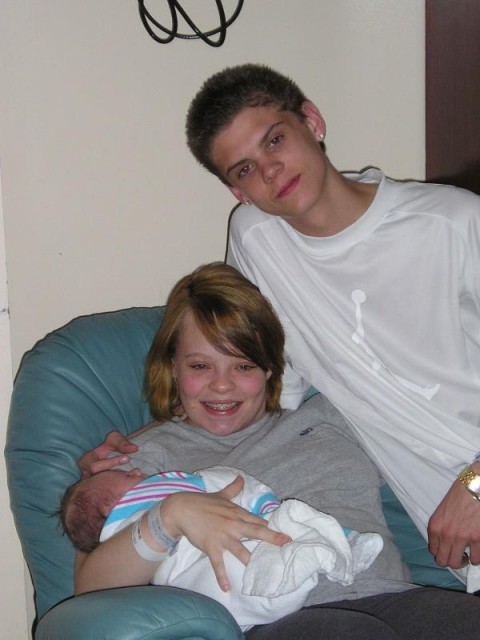 Catelynn, Tyler and baby Carly prior to giving her up for adoption

Tyler and his mom drive Butch to the courthouse where he gets out and says something along the lines of “If I come back out that means I’m not in jail.” (Is that really how that normally works?) Eventually Butch does come back out and sings the praises of something called a “personal bond” and the three return home. Butch hops in his beat up loot-hauling van and heads back to try to patch things up with Catelynn’s mom April. I guess if Butch had been sent back to jail Tyler and his mom would have sat there for an hour? Two Hours? Three hours? And then said, “I guess he’s in jail. Let’s head on back home, we’ll come back next year and pick him up.” ???

Needless to say, the episode sparked a lot of interest in Butch as folks began wondering what exactly it was that he had done to get in so much trouble repeatedly. So, I did some research and found out! Here you go, straight from the Michigan Department of Corrections! It’s the criminal record of one Darl Lynn Baltierra. (I’m not sure if that’s a lazy spelling of Darrell or if it’s actually pronounced like “snarl.”) 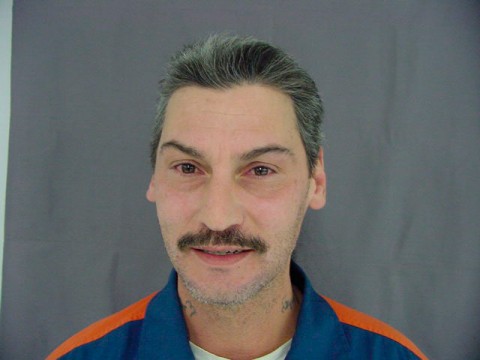 It seems Butch has a weakness for breaking into houses! Good gracious! The dude is barely back out on the street before he’s busting into another building! Oh, and getting caught. The mug shot is classic, but they really needed to get a profile shot to capture Darl’s most memorable and distinguishing attribute – his uber-mullet.

Here are the SUPERVISION CONDITIONS:
01 – Contact agent no later than first business day after release
02 – Must not change residence
2.0 – Not use/possess alcohol/intoxicants or in place served
2.1 – Complete Sub Abuse Treatment Program as referred by agent
03 – Must not leave state
04 – Not engage in any behavior that constitutes a violation
4.4 – Abide by a specified curfew as directed
4.16 – Obey all court orders
05 – Comply with alcohol and drug testing ordered by field agent
06 – Not associate with anyone you know to have a felony record
07 – Must not own or possess a firearm
7.1 – Pay cost of treatment
7.5 – State Costs
08 – Must not own, possess or use any object as a weapon
09 – Make earnest efforts to find and maintain employment
10 – Must comply w/special conditions, written and verbal orders

Need to catch up or want to watch again? Buy the complete first seasons of 16 & Pregnant and Teen Mom.

VIDEO Amber Portwood tells Dr. Phil she was high every time she was on Teem Mom