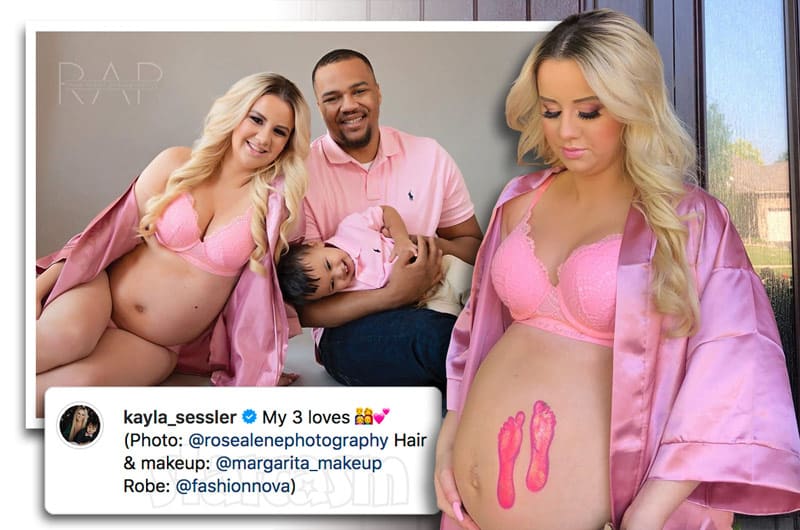 Teen Mom: Young and Pregnant star Kayla Sessler revealed back in February that she is currently pregnant with her second child — this time with new boyfriend Luke Davis III. The 20-year-old is due next month, and she just shared some pictures from a recent maternity photo shoot in which her rather sizable baby bump is very much on display in lacy pink lingerie!

The first photo shared by Kayla on Instagram on Thursday included her son Izaiah as well as first-time dad-to-be Luke, who were both slightly more covered up in matching pink polo shirts. (Photo included above.)

“My 3 loves ?‍?‍?‍??,” Kayla captioned the image before crediting photographer Rose Alene, her hair and makeup artist Margarita, and Fashion Nova for the robe. (I believe the bra and panties are Victoria’s Secret, but Kayla didn’t tag them.)

Kayla followed that image with another photo with just her son and her bun in the oven:

“Zay and baby A ???,” she wrote. Kayla would confirm in the comments that the baby’s name will start with the letter “A,” but she didn’t reveal the name she and Luke have chosen.

If you’re curious whether Izaiah is getting a little brother or a little sister, Kayla posted a gender reveal video in March announcing she and Luke will be having a girl. Of course, that was probably pretty obvious given the pink-themed maternity shoot.

Speaking of the pink theme, Kayla revealed in the comments that she was inspired to do the shoot by the Prince Family. Biannca Prince shared a series of similar pictures back in April, but her fellas went all the way with matching pink shorts! Dad Damien even had on pink socks.

Although Kayla and her bump were the reason for the photo session, I think Izaiah may have stolen the show. Kayla shared a couple images of just “Zay” looking mighty handsome in pink:

Luke also shared a couple photos from the shoot, including a different family photo:

In case you missed it, Kayla began dating Luke late last year. He and Kayla had known each other in high school, and rekindled their friendship when they bumped into each other at college.

If Luke looks familiar, that’s because he was featured on the show late in Season 1. Kayla was registering for college courses when she bumped into Luke, who she revealed was a high school acquaintance of hers. “We did go to high school together, but we never really talked too much because I was dating Stephan my whole high school,” Kayla said. “Stephan does know him too, but they’re not really friends.”

In addition to the images posted by Kayla and Luke, the photographer and the hair and makeup artist also shared some additional pictures. Here are those:

A post shared by Rose Alene Photography (@rosealenephotography) on Jul 7, 2019 at 7:39pm PDT

Kayla’s due date is August 21, so fans will probably be seeing a few more maternity photos before Zay’s little sister arrives ?. I’m also sure that fans will be seeing a lot more of Kayla’s second pregnancy journey when Teen Mom: Young and Pregnant returns for a new season! There has been no official announcement on a premiere date yet, but the moms have been filming for some time.

In case you missed it, it appears that the only three moms returning will be Kayla Sessler, Ashley Jones and Brianna Jaramillo. MTV reportedly cut Lexi Tatman due to her story line being a bit boring, and Jade Cline has moved over to Teen Mom 2 to replace Jenelle Eason. There has been at least one new mom already added to the cast, but I wouldn’t be surprised if producers add two.

REPORT Anne Hathaway is pregnant with her first child