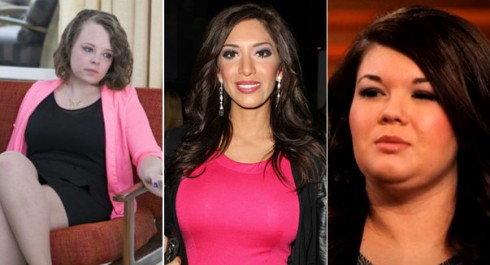 After Catelynn Lowell posted about her upcoming “Being Catelynn” special our friends over at The Ashley reported that Teen Mom fans could also expect “Being Amber” and “Being Farrah” specials.

MTV has now confirmed this news in an official press release today. Here’s the 411!

Former teen moms Amber Portwood, Catelynn Lowell and Farrah Abraham will return to MTV with a trio of one-hour documentary specials, that feature a glimpse into their lives since the end of the groundbreaking hit docu-series “Teen Mom.” “Being Farrah,” “Being Catelynn” and “Being Amber,” airing Sunday, February 23 beginning at 8:00 p.m. ET/PT, will give viewers a chance to catch up with the women who they watched go from teenagers giving birth on the first season of “16 and Pregnant” to young adults fumbling through the trials, tribulations and consequences of having a baby too young on “Teen Mom.” Now in their early twenties and struggling with new life responsibilities, we find Amber newly released from jail and seeking to re-connect with her daughter Leah, Catelynn struggling to maintain her relationship with her long-time fiancé Tyler and Farrah dealing with all the controversial choices she has made. “Being Farrah” airs at 8:00 p.m. ET/PT on Sunday, February 23 followed by “Being Catelynn” at 9:00 p.m. ET/PT and “Being Amber” at 10:00 p.m. ET/PT.

Since the wrap of “Teen Mom” Farrah has kept herself busy while making several much talked about life choices including making a controversial adult entertainment film. Now 22 and still single, Farrah and her daughter Sophia have moved to Austin, TX – purportedly in search of a “normal life.” Unfortunately for Farrah, living a “normal” life is easier said than done. Additionally, Farrah has moved thousands of miles away from her mother, Debra, but their challenging relationship will be put to the test when Debra comes to visit. It’s never been easy for Farrah to deal with her family, so with the added stress of Farrah’s dad, Michael, living in her guesthouse, it’s a struggle for Farrah to keep the peace for Sophia’s sake. And Debra’s visit will force Farrah to face and explain some of the mistakes she’s made.

Catelynn and long-time fiancé Tyler placed their daughter Carly, for adoption when they were teens. The only “Teen Mom” couple to place their child for adoption, Tyler and Catelynn still remain close to their adoption counselor, Dawn which has been helpful since lately Carly’s adoptive parents, Brandon and Teresa have put several restrictions on Catelynn and Tyler that they never expected, including not allowing them to share photos of Carly on social media. “Being Catelynn” follows Catelynn, now 22 and living in Michigan, as she struggles with some heavy issues from Tyler calling off their wedding, to realizing her adoption isn’t everything she expected, while balancing her now stronger relationship with her mom April and younger sister Sarah, with a hectic schedule of speaking engagements promoting adoption and the prevention of teen pregnancy.

Viewers will remember Amber’s very public struggles with anger and addiction. At her lowest point, she asked a judge to send her to prison to serve a five-year sentence after failing a drug test. While in prison, she enrolled in a special rehab program for inmates, and earned her GED. All of her efforts paid off, as she was able to leave prison after only serving a year and a half of her sentence. Back home in Indiana, Amber is living with her grandparents and figuring out how to cope with the stresses of the outside world. Besides spending time with her grandparents, Amber’s first week out of prison includes quality time with her family, including her parents, her brother, Shawn, and her cousin Krystal. However, Amber’s main priority is to reconnect with her daughter Leah, who she was only able to see three times while in prison. Amber’s reunion with Leah is made difficult by her shaky relationship with ex-boyfriend Gary who currently has a new girlfriend. Gary bringing a new woman into Leah’s life is hard for Amber to deal with, especially since Gary and Amber discussed getting back together while she was still in prison.