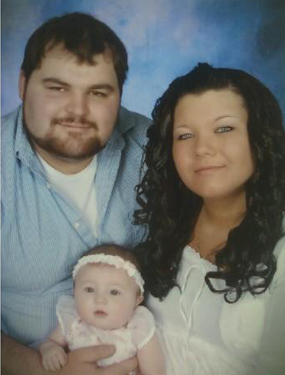 MTV has shown us violence against Gary Shirley by the mother of his child, Amber Portwood, before, but Tuesday’s episode indicates that it has escalated.

In Season One of Teen Mom Amber is seen choking and slapping Gary after he disrespects her father. Now we see that MTV’s cameras caught Amber punching and hitting Gary many times while he calmly asked “Are you done?”

She was throwing Gary out of her apartment after he announced he was taking their daughter Leah away because of Amber’s behavioral problems. As Gary started down the stairs carrying a heavy television after Amber’s initial assault, she finished with what looked like a kick to his back.

This a severe domestic violence situation, and there would have probably been an arrest made at the time of the incident if this had been violence by a man against a woman. Because the gender was reversed, nothing came of it.

Police in Anderson, Indiana, where Gary and Amber live, have launched an investigation about the incident after people sent them emails about the show. Both Amber and Gary were in Tennessee filming for MTV when they tried to contact them, so it’s still unclear what action the police plan to take, or if MTV will be in any way be held responsible for witnessing but not reporting a crime.