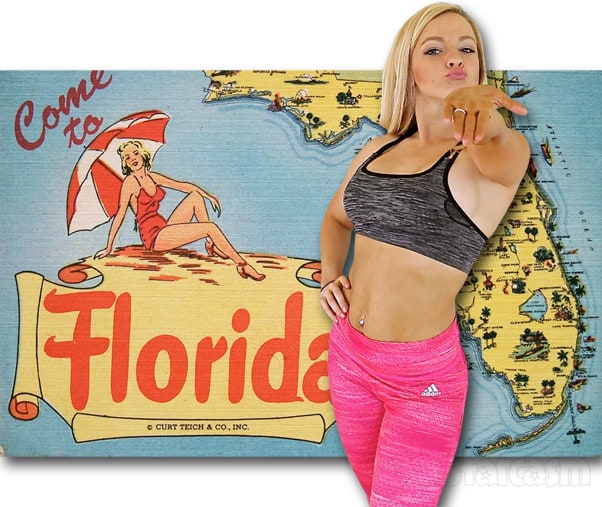 Mackenzie made the announcement during a Q&A session with her Instagram followers. “Do you plan to always stay in Oklahoma?” one follower asked.

“Nope,” Mackenzie replied. “I’ll only be here for 1 more week. Ready to grow my career elsewhere.”

When asked where she planned to move, Mackenzie’s answer was Lakewood Ranch in Sarasota, Florida. According to their website, Lakewood Ranch is “a 33,000+ acre master-planned community located in Manatee and Sarasota Counties in Southwest Florida.” (Mackenzie will be joining another rather famous Lakewood Ranch resident who is one of the few public figures who might have more energy and enthusiasm than Mackenzie: NCAA basketball announcer Dick Vitale.)

Why would Mackenzie choose to move away from her hometown of Miami, Oklahoma? “I’ve been in my tiny home town all my life,” Mackenzie explained. “I’m at a point in my life where I’m ready to see what else is out there, grow my career, heal, get away, show my kids more to life. I could only grow so much here.”

Mackenzie mentioned in her response that she hopes to “show my kids more to life,” and she responded to a follow-up question about whether or not she will have her children with her with a confirmation: “I would never, and will never, leave my children.”

In the same inquisitive post, Mackenzie was asked whether or not Josh will be making the move with her. Mackenzie did not reply to that portion of the question. She did respond to another follower wondering how the relocation would impact their co-parenting. “We are just going to figure out how to make it work,” Mackenzie replied.

Despite their most recent very public falling out, Mackenzie and Josh appear to be getting along well now. There have been rumors that their recent split was another publicity stunt like some of their other headline-grabbing relationship issues in the past, and if Josh moves to Florida as well, those rumors will certainly build up more steam. (I checked online court records and there still doesn’t appear to be any sort of official divorce filing in her county.)

Speaking of Mackenzie and Josh getting along well recently, she was asked: “How can you set aside what Josh did to you and not be angry?” Mackenzie was pretty humble, and also quite confident, with her response. “We have both been pretty sh*tty to one another. I’m 25 with a great life ahead of me. Why would I let him have the control of me living an angry filled life? I’m too good for that. Life is too short.”

What will Mackenzie be doing to “grow her career” in Florida? At least part of that growth will be teaching weekly live classes — which I assume will be fitness/workout classes, but they could also include nutrition and other topics that Mackenzie is familiar with thanks to her Body By Mac business.

I wish Mackenzie and her family well on the newest chapter in her rather eventful life! It sounds like she already has a network of friends/co-workers lined up in Florida, so hopefully that will help ease her transition a bit. Plus, I am guessing she will have a familiar MTV crew with her at some point, which can be like family from what I understand.