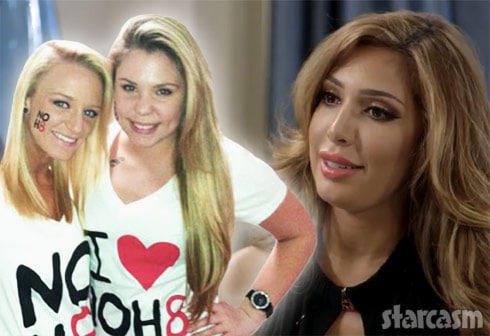 Kailyn Lowry has her sights set on Abraham following all of the attention that has surfaced since the airing of the reunion brawl.

Farrah told Too Fab, “As far as I’m concerned, I will always be a part of something I started and no bullies, no criminals, no violent s**t is going to take me away from a show that I started. When it’s my time to go, I’ll go, but the only time that’s going to be for ‘Teen Mom’ is when the network takes it off the air… I’ve been pro-take it off the air for many years because I’m not OK with seeing women who are getting pregnant worried about being famous like Chelsea Houska, Kailyn Lowry… It’s sad to me that these women who I meet/see, so eager to be famous.”

The Real Mr. Housewife asked Kail about Farrah’s comments and she told them:

“The thing with Farrah is that she’s so negative all the time. She never has anything nice to say about anybody on the cast… I see her doing big things… I would love to be able to support her doing those things- but when she’s constantly slamming me in the media and saying things that are so out of left field, it’s hard to find any kind of good in her… Her exact words were that Chelsea and I got pregnant again for fame…. but Chelsea and I were both married and in our mid twenties… Farrah is out here doing p0rn0s to stay relevant.”

Lowry then tweeted at Farrah:

Hey @F1abraham, do you ever have anything nice to say about anyone?

wondering why I'm being brought up in Farrah's interviews… the rest of us support each other. Maybe she's the problem.

yes real people who aren't fake puppets of @mjfree production company. Thanks for asking sweety hope you stay out of the drama

hard to stay out of it when you bring my name into interviews & say I got pregnant to stay relevant.

Maci Bookout jumped in the fray with the following tweet:

When someone asked Chelsea Houska if she’d read what Farrah said, she responded, “Kail just showed me hahaha.”

While Chelsea was laughing at Farrah’s harsh words, her old man wasn’t as dismissive:

#hilarious I wonder exactly which TM would do ANYTHING to be famous.Chelsea flies so far under the radar, @MTV forgets about her #teenmom2 pic.twitter.com/VMGq6vWIpu

The ill will between Farrah and her fellow castmoms won’t be ending anytime soon if her additional comments to Too Fab are any indication. “I’m not worried. I could probably slug all three of the Stooges in one breath and knock them all out. That’s how little they are compared to me. I don’t have the energy or time, I’m working and I’m running businesses. If I’m ever concerned about something, I’ll have security deal with it. They’re a joke. I hope that they’ve learned from their embarrassment. I’m moving on and the next season will be amazing, with or without them,” she said.