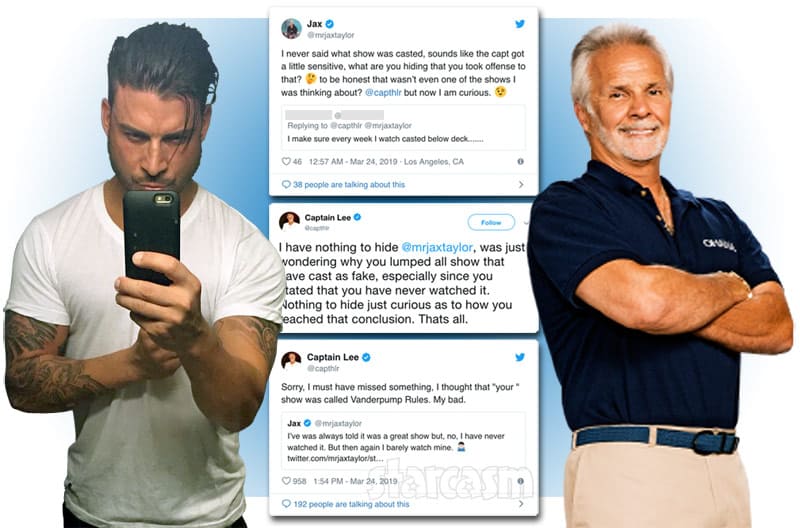 It looks like we have ourselves a good old fashioned Bravolebrity sailor feud! In a rather unexpected bit of social media drama, Below Deck‘s Captain Lee Rosbach and Vanderpump Rules star (and 37-day aircraft carrier vet) Jax Taylor exchanged Twitter cannon fire on Sunday after Jax expressed his disdain for reality shows that are cast as opposed to featuring a group of people who were already friends — like Pump Rules.

The biggest question I get is, why do you think our show is successful? Easy answer, listen up networks!! If you want to do a show w/ similar format to ours pick a group of friends that already exist and have chemistry, casted shows are fake and don’t work.

One Below Deck fan chimed in by pointing out : “I make sure every week I watch casted Below Deck…….”

Jax responded to that by poking the Captain Lee bear a bit, and that set off the salvo between the two:

I never said what show was casted, sounds like the capt got a little sensitive, what are you hiding that you took offense to that? ? to be honest that wasn’t even one of the shows I was thinking about? @capthlr but now I am curious. ?

I have nothing to hide @mrjaxtaylor, was just wondering why you lumped all show that have cast as fake, especially since you stated that you have never watched it. Nothing to hide just curious as to how you reached that conclusion. Thats all. https://t.co/u6HVYnsrJO

Sorry, I must have missed something, I thought that "your " show was called Vanderpump Rules. My bad. https://t.co/u6HVYnsrJO

I will say it again, shows like mine that are “casted”, pretending to have life long friend ships when we all know you aren’t is easy to see, VPR is nothing like your show in anyway. We have all been friends years before and will be years after. https://t.co/nMCoIu5QOF

Captain Lee later admitted he was just fooling around and there was no real animosity between him and Jax. “Don’t lower yourself to interact with that lying a**hole,” someone tweeted to Captain Lee about Jax. “He’s really way below your level of intellect. You’d have a more interesting and honest conversation talking with a fish.”

“Oh, I’m just having some fun,” Captain Lee responded. “Nothing malicious or mean intended at all. He has his job to do and I do mine. I have no issues with @mrjaxtaylor.”

And, as much as I might not like to say it, Jax is right in that he wasn’t really calling out Below Deck, but only shows “with a similar format” to Pump Rules. To be honest, I think he was calling out Lindsay Lohan’s Beach Club on MTV, which was trying to be a Pump Rules clone with a cast that was derived from an international casting call. The show was a big flop. You may also recall that Jax claims to have hooked up with Lindsay, a claim that she flatly denies.

Jax explained further in tweets that did not involve Captain Lee:

real world they told the audience it was casted, “8 complete strangers picked to live together? It said it in the opening credits, so that’s fine, Iam talking about the shows that are on today where the cast claims to be “friends” on shows, but you can tell it’s been casted. https://t.co/G6VGPr5aEo

Today’s audience can see through “fake” shows is all I am saying. I don’t see other cast members on other shows hanging out when they don’t film… but they are supposed to be best friends? My point is, it’s more authentic to get a group of existing friends to do a show like ours

Bumping heads on Twitter is nothing new for these two Bravo bros. Captain Lee took to the defensive just last month when Jax scoffed at the fact that Florida has a hockey team:

@mrjaxtaylor Where do you get that from, I go to quite a few games and we have great crowds. This is where people come to watch their team play and then go to the beach, not out to shovel snow. https://t.co/IjAZOdekcV

Also, Captain Lee and Jax have actually spent a little time together as they were both guests on the same episode of Watch What Happens: Live! back in September of 2017. Here’s a clip of them together answering questions about sex:

ANDY: My girlfriend will only have sex with me one or two times a week. How can I get her to put out more? Any advice?

JAX: Break up with her.

VIDEO Stassi Schroeder returns to Vanderpump Rules: Cast reactions to ‘The B*tch is Back’